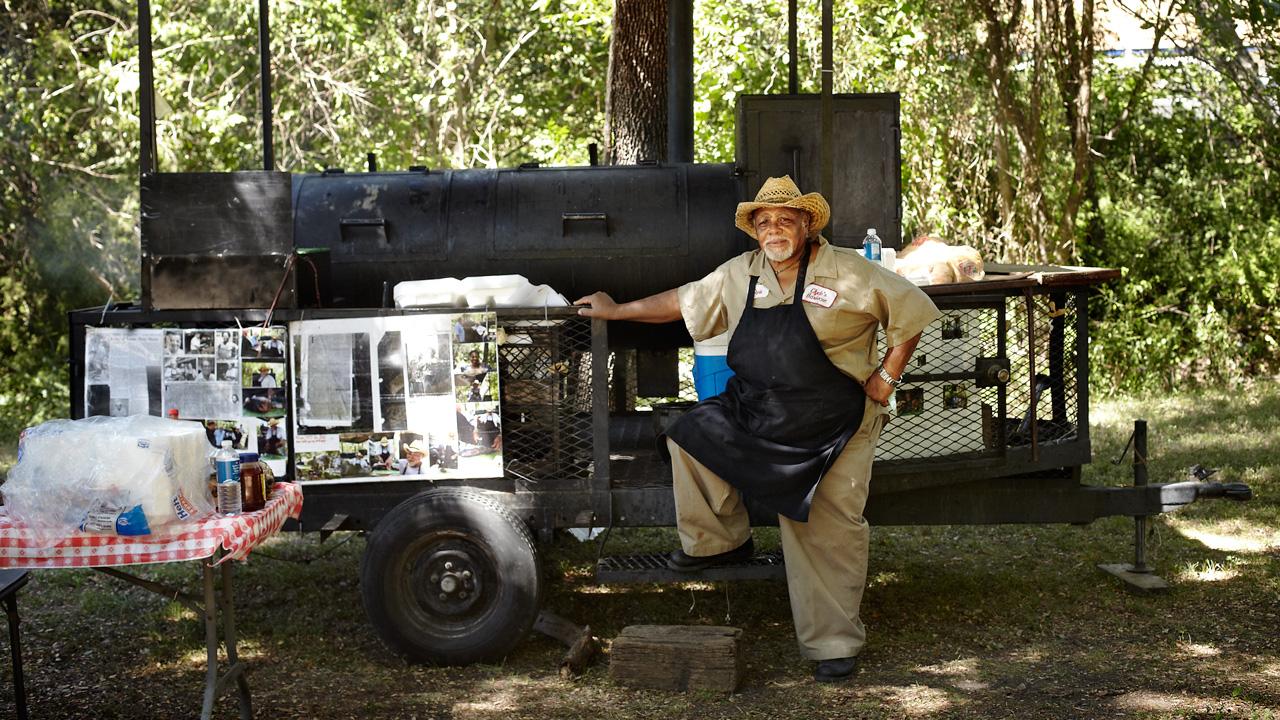 I was down in Dallas in September 2012 to photograph a story on high school football and was staying with an old friend who lives there. He and I both like to take the opportunity to enjoy high quality meats whenever the chance presents itself. The American South, of course, is the place to explore what the meats are capable of giving when cooked on a barbecue pit. Each state has its own methods and techniques and, I’m sure, if you want to get really picky you can find those who believe it varies dramatically from county to county too.

A few days before my arrival, my friend, Trent, sent me an email with a link to a post on the Texas BBQ Posse blog, strap line, “In search of the greatest smoked meats in the greatest state in the union.”

Gary Jacobson, who wrote the post, began by explaining that he had recently been the recipient of a letter from a man by the name of Clyde Biggins. Clyde claimed that he had once been the owner of “Clyde’s Old Fashion Hickory Smoked Barbecue” on Westmoreland Road in Dallas.

In 1993 he had been convicted for his part in a conspiracy involving illegal drugs, was convicted and now almost at the end of an eighteen year term in a federal prison.

The piece went on to explain how Clyde was looking to get back on his feet when released and could the members of the Posse do anything to help in that regard. You can read the full text at the link below. It’s a great read and is a story that contains the mouth watering seeds of the possibilities of redemption.

To cut a long story short, Clyde has been unable to secure the food licences that would allow him to once again set up shop in Texas. To get around this he has put together a mobile rolling barbecue and positioned it in his front yard. Food is free but diners are encouraged to leave a tip. He invited the Posse over to try his cooking and Posse member Jim Rossman revealed, “Clyde’s the real deal. The meal I had would easily rank him in the top 5 among Dallas-Fort Worth BBQ joints, plus he has a great personality. That’s a winning combination.”

“Watching Clyde work that pit was like watching a great conductor lead a symphony,” Posse co-founder Chris Wilkins said. “No thermometers, gauges or gimmicks. It was old school cooking by feel alone.”

Clyde was reluctant to allow the members of the Posse to reveal his address on their blog, for fear of being shut down by local officials, despite the fact that two Dallas cops stopped by that afternoon to pick up some takeaway, so there was no way to locate him.

After reading the story I sent back a reply to Trent: “Your mission? Find Clyde.”

In the lead up to my arrival Trent reported back regularly with the news. No dice every time. All through my stay the backdrop to the hundred and five degree heat was the hunt for Clyde. Still nothing until, on my last full day in Dallas, Clyde joined Facebook. Trent sent him a message with his phone number and within five minutes Clyde had called back with an invite to come on over and “sample some meats”.

I didn’t go over there with the intention of doing any filming but I took my camera anyway, mainly in case I got the chance to do a portrait of him or something. When we got there, the mid afternoon sun was beating down but in the shade of some big, heavy trees everything just seemed so much more mellow and amenable. We sat down on some chairs in front of his pit while the smell of pecan smoked meats drifted on around and he was more than happy to tell us his story. So, I had to use what I had and I shot this short handheld with one 8gb memory card and interviewed him with the voice memo app on my iPhone. Someday I’d like to go back there with a jib, a dolly and a crew worthy of the subject.

If you’re ever in the Dallas area make sure you take some time out to find Clyde. He really is the real deal. In the meantime, this short film might give you a flavour of how good his food tastes.