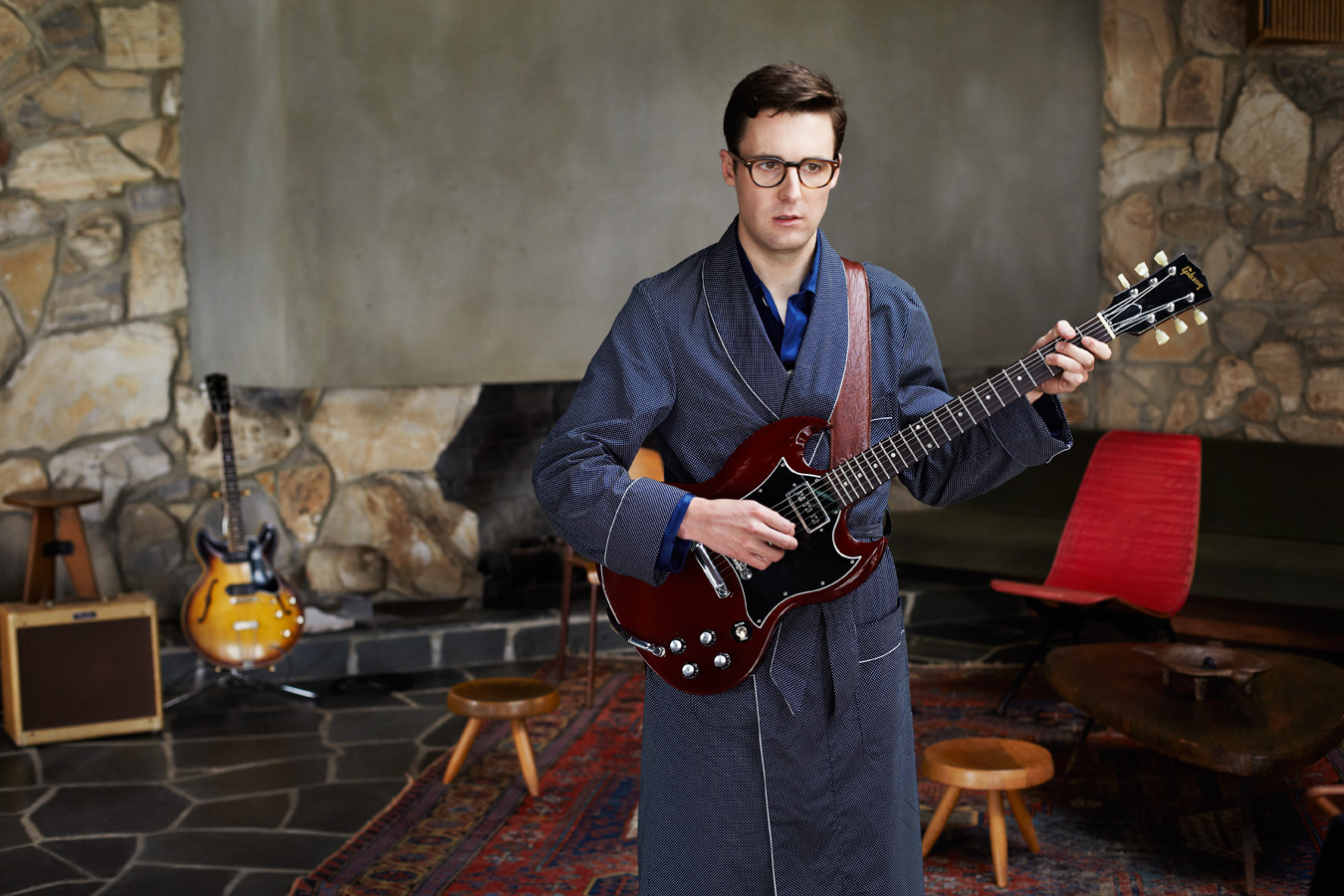 Mr Nick Waterhouse in a scene from his ‘The Way I Dress’ film. Los Angeles, March 2013. The film itself is at the bottom of this post.

Los Angeles based musician Nick Waterhouse begins this short film for MrPorter.com by laying out his philosophy in one simple sentence. Clean living under difficult circumstances indeed.

Nick’s album, ‘Time’s All Gone’ is a huge favourite of mine, a masterpiece of early 60s drenched R&B that has the feel, the sound and, above all, the vibe of that recording era. The record sounds like it was made by a bunch of real life human beings gathered in a room at the same time. A rare thing these days.

This is the fourth series of films I have made for Mr Porter, the menswear partner of online fashion innovator Net-a-Porter. It was also the first time we had shot any of them in Los Angeles. After three series in the often cramped and confined locations of London and New York, the wide open spaces and all encompassing light of southern California were a new muse to behold. 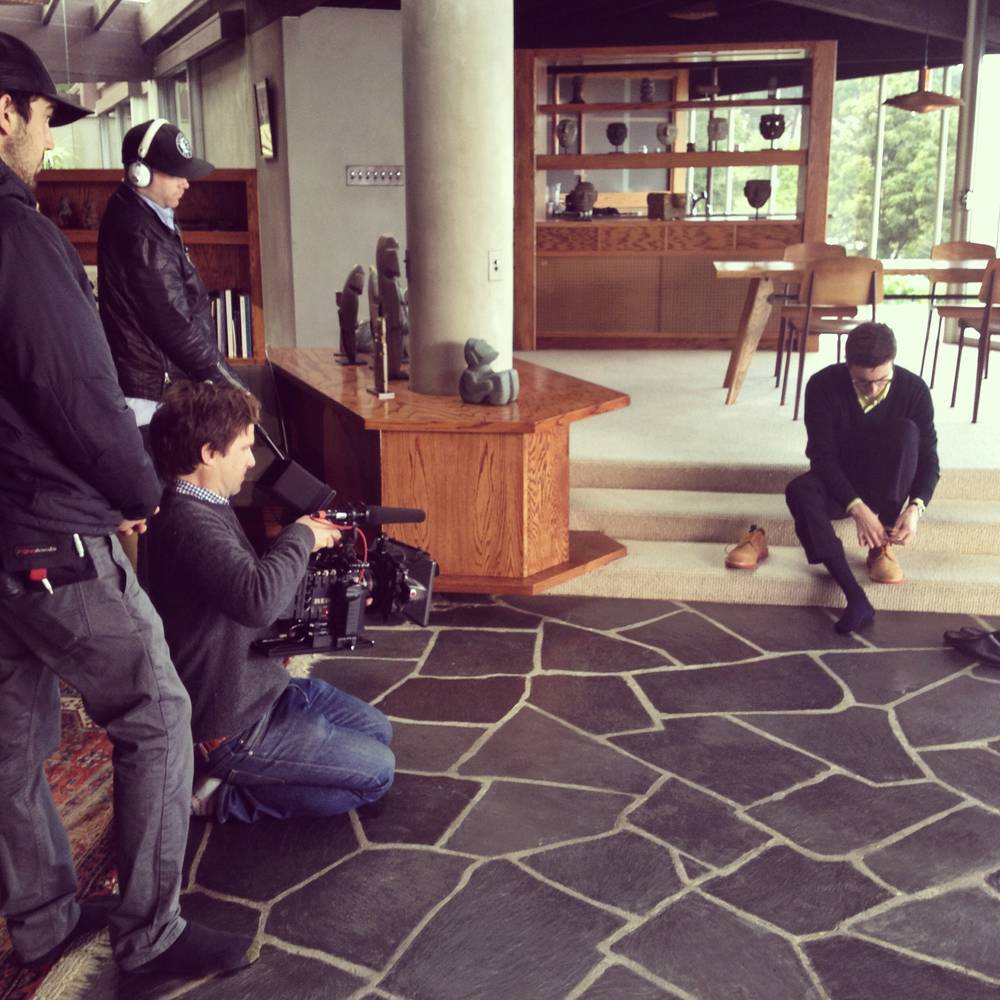 My DoP for the three films we shot there was Joseph Aguirrewho as well as being a great friend is also a cinematographer with work that I love. We met because our wives grew up together, have become good friends and have often talked about all the film and photographic things that we have in common, so to finally work with Joe was a thrill.

All the previous films I made for Mr Porter I had shot myself. The crews on these films are usually me and 2 or 3 assistants. Not motion people but stills assistants who I have worked with a lot and who are as into working on and learning about motion as I much as I am but who are not massively experienced in that field. I have learned that stills and motion are like the two circles of a Venn diagram. There are areas where they converge but each has it’s things that have absolutely nothing in common and discovering what they are tends to come thick and fast when you are on the shoot.

In LA however, we had been given a better budget than before and this allowed us to hire some of Joe’s people. So finally I had the use of a gaffer (responsible for the operation and placing of lighting), a key grip (provides camera & lighting support) , a DIT (Digital Imaging Technician) who does the job that used to be done by a clapper loader in the days of film, a camera assistant and a sound recordist. Joe also scored us a set of fabulous 1970s Zeiss Super Speed prime lenses that flared beautifully when angled into the sun slightly. 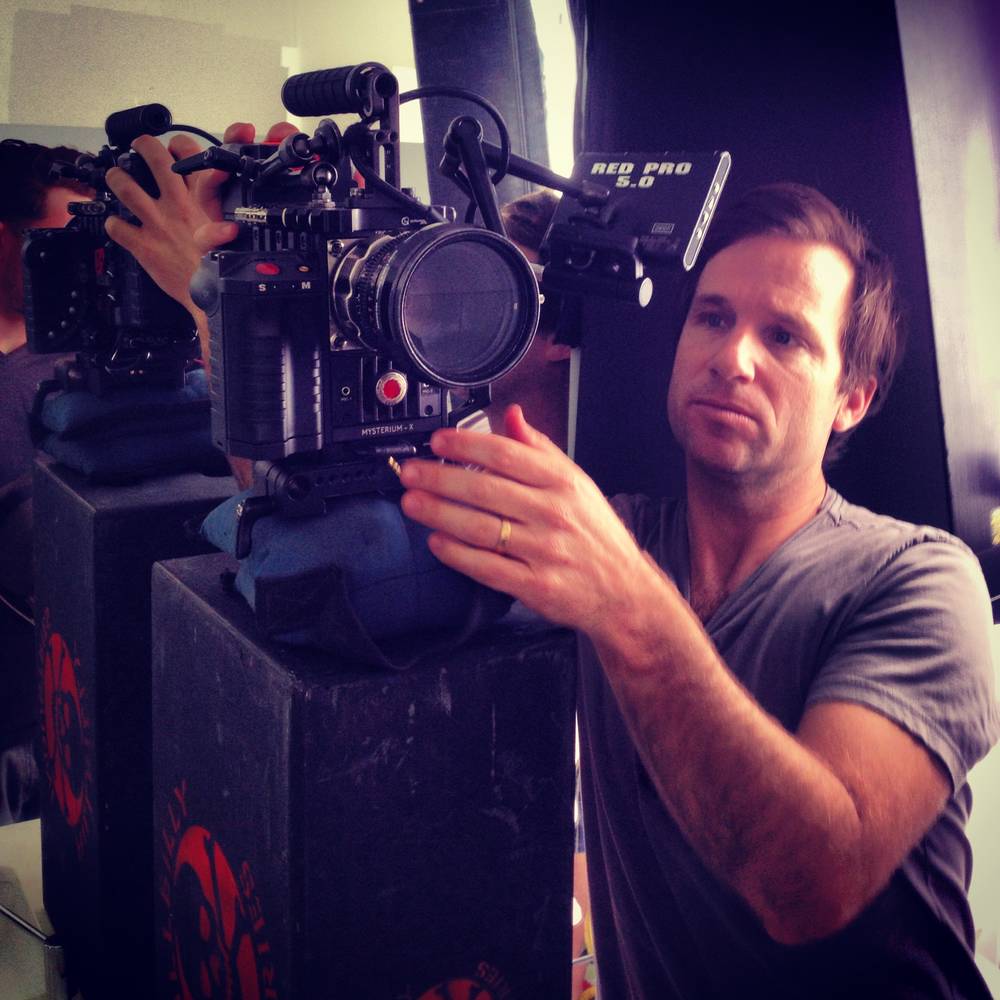 Having these resources cleared a space in my head to think properly about the film, whereas with the older films I had to be a gaffer, a grip, a DIT, a location manager and a whole load of other jobs before I could even think about being a ‘director’. It’s also good to know that these films are not scripted in any way. I am making what is essentially a filmed portrait of someone each time. These guys aren’t actors. They turn up with no idea of what to do and I have to make them feel comfortable and relaxed enough to go through the dressing process, something that we may only ever do in front of someone we have a co-habitational relationship with, half a dozen times or more in order to collect enough footage with which to cut a two and a half minute film. Not having all the other paraphernalia to deal with was a relief of Mafeking proportions and allowed me to really just talk to the subject and get them feeling right. 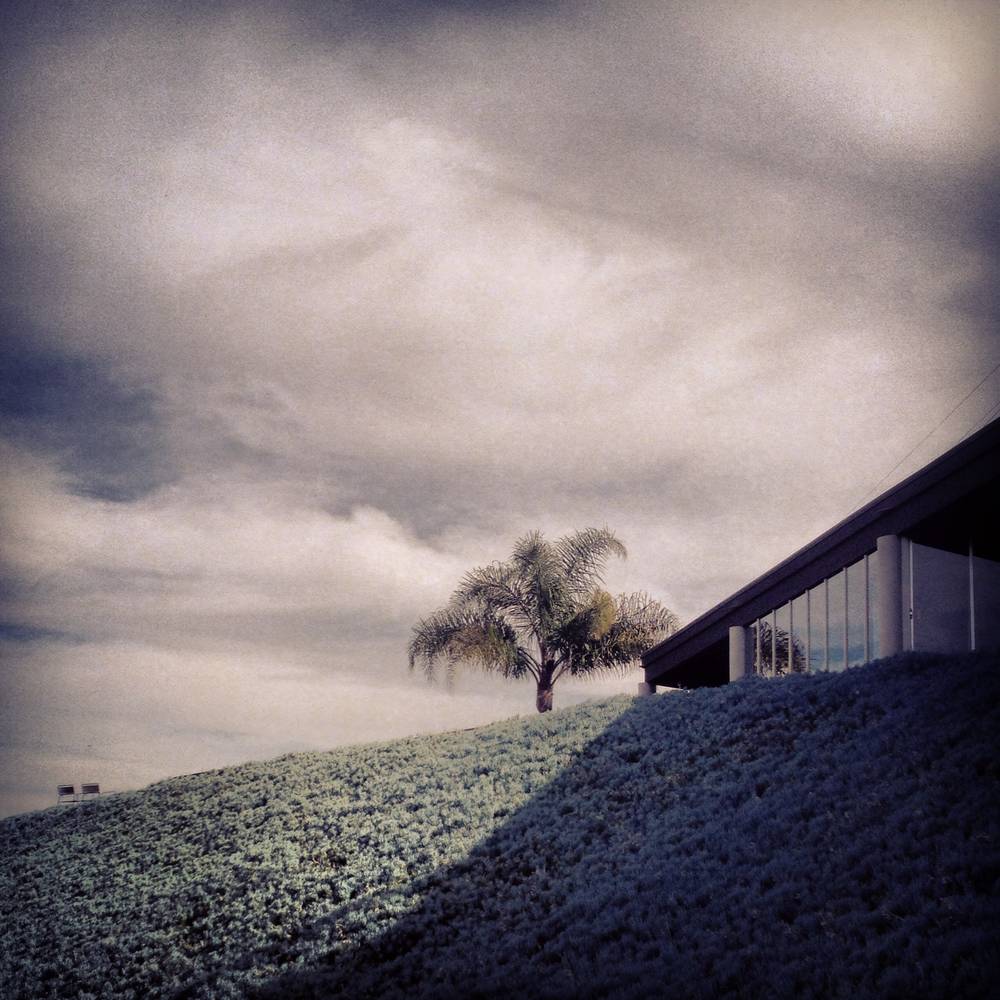 I would explain to Joe how I saw it in big picture terms and then we would spend half an hour throwing ideas around regarding camera moves, angles, shooting through windows, where to come in and where to go wide. My general rule is that wide lenses are good for moving in and out and longer lenses are for side to side tracking movements. Even though I had a bigger budget than before it was still miniscule by any other professional standards. We had enough to splurge on one fancy piece of kit that could pull off some nice camera moves and Joe suggested we get a thing called a Dana dolly. A dolly is a way to allow the camera to move in a given direction. Traditionally, the most well known dolly is probably the one where the camera sits on a piece of railway track. There are dozens of versions of this though, and the Dana is like 2 pieces of scaffold pole that can be on the floor, balanced on sandbags that sit atop apple boxes, fixed to C-Stands that straddle furniture so you could make the camera move over the top of a sofa, for instance.. Over the course of the three LA films we had it doing every conceivable trick, all in the service of the films.

Additionally, I use the morning of the shoot to study the subject so that I know what direction to take the questions in when we sit down in a quiet area of the location to do the interview. I later cut this into a monologue for the film’s soundtrack. Typically, we talk for about half an hour. Initially I have my stalwart questions on matters of style that I begin with. When we have worked through those and the subject has begun to relax the conversation tends to become looser and more improvisational. That’s when the good stuff comes. The early part is the bones, the latter half is the meat. You need the bones on which to hang the meat. 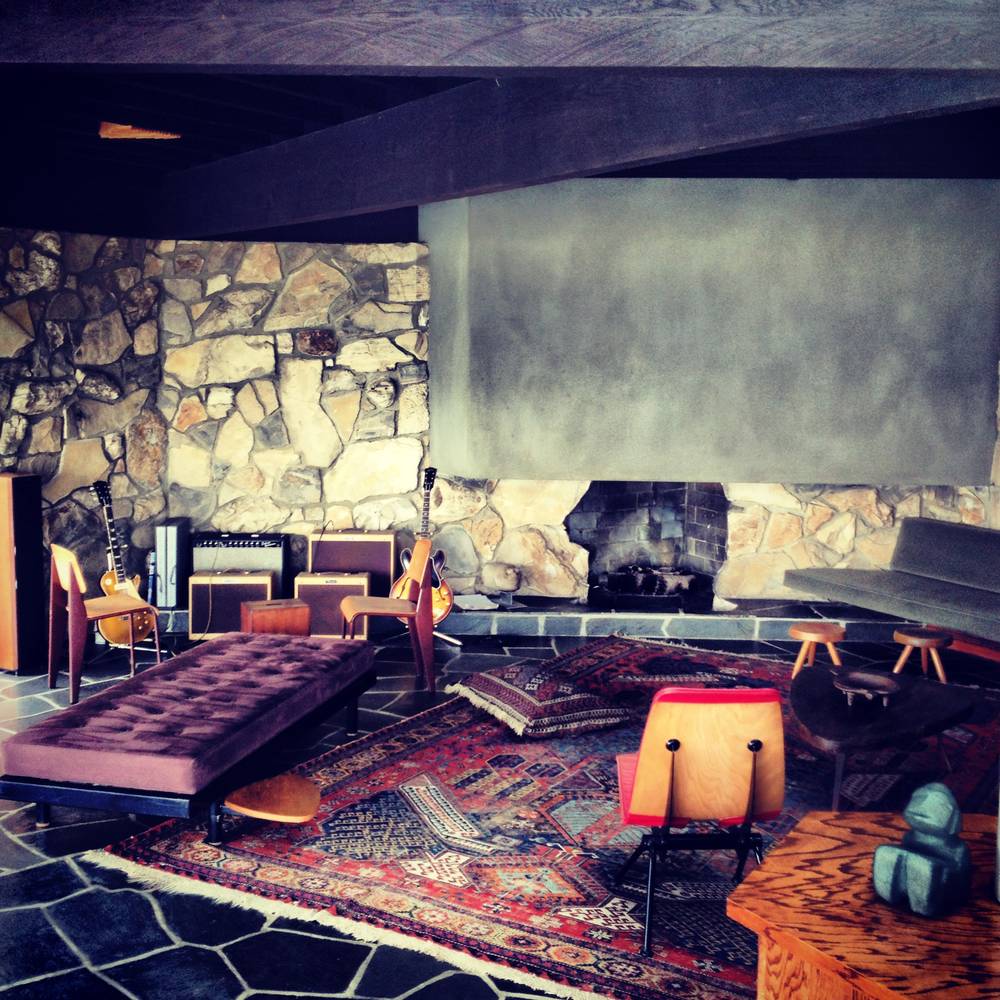 For the Nick Waterhouse location we had the 1956 ‘Harpel’ house designed by John Lautner. The house had undergone major alterations by some previous owners who, to all intents and purposes, wrecked it by adding on a second floor that was out of keeping with the architect’s original construction. Fortunately, current owner Mark Haddawy has completely stripped back and restored the house to it’s original form. With it’s glass walled living area and pool, the house, high up in the Hollywood Hills is the epitome of the easy, breezy mid-century California lifestyle.And as I type this, John Coltrane’s ‘A Love Supreme’ has magically been shuffled to the front of my computer’s playlist to complete the visual and aural mid-century aesthetic perfection in which to bathe. 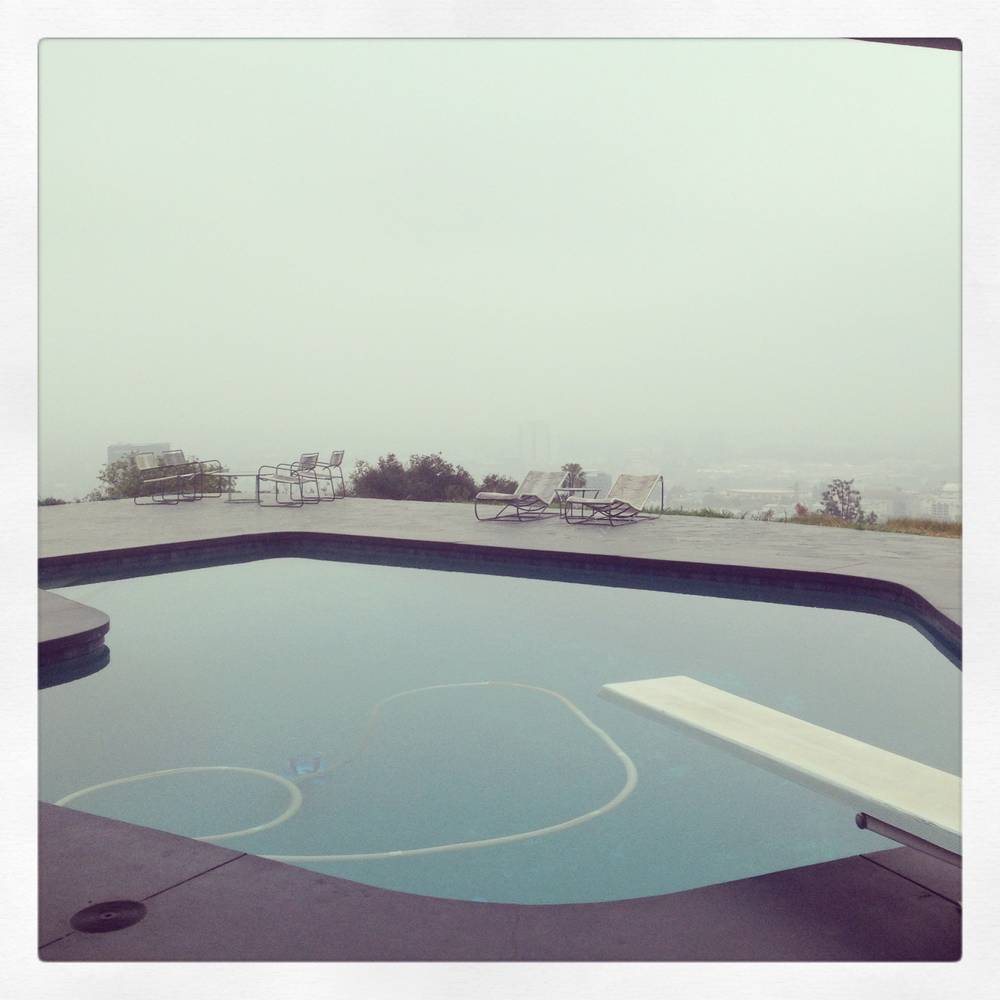 I have now made twenty of these films. I don’t know if we will do any more. I feel that, really, I need to move the plot on from the part where the guy gets dressed, perhaps go and find out what happens to him when he leaves the house. When I first had the idea for them it occurred that whenever we see someone dressing in a film it’s always there to act as a precursor to some yet to happen piece of anticipated action – I think of Richard Gere in ‘American Gigolo’ or any film in which our protagonist is going on a date and we need to see their nervousness/confidence before the big game. There must be some good John Cusack moments out there, surely?

My idea was to flip the whole thing upside down and make it all about the dressing process, to the extent that everything outside of that moment becomes extraneous. I wanted to go in on it, almost turn everything inside out and make some quiet, dignified studies of the way men prepare themselves for the day, much as Little Edie does in ‘Grey Gardens’.

“This is the best outfit for the day.”

As we have gone on, however, I have tried to bookend each film with something that tells us about these men. The two films that will follow this do that I think and I will post them as soon as Mr Porter releases them in the coming weeks.

For me though, this series, the first in simple photographic studios against plain backdrops, the last in some of the hippest houses ever built, has been an amazing and concentrated class in film making, story telling, moving a camera, understanding sound, delegating a crew and, most importantly, the art and craft of directing. It’s still early, there is lots here that I am unhappy with, but I now feel confident that with a proper script I would bring a visual style as well as a narrative technique to it. My biggest issue with these films was the sheer shortage of time in making them. No prep time at all, a quick location scout maybe and then a dive straight in to how to handle the subject and make an often monotonous process viewable.

I think the biggest problem photographers have in shifting from stills to motion is to stop themselves from making a series of beautifully composed and lit moving photographs. We must remember that films are for story telling, not for freezing in time the perfectly lit moment of formal perfection, etc etc. It is no secret to me why the best fashion films so far have been made by bona fide film directors, not photographers. As I said earlier when I brought up the Venn diagram thing, stills and motion are NOT the same. Don’t fool yourself into thinking that they are. The similarities end just after the light has passed through the lens.