I am an American artist who is doing a project forThe Thing Quarterlyand Levis and I am looking to hire a photographer in London for a shoot.

I got your info from Geoff Chadsey who is a photo editor for Time Inc.

Basically, I need to have photos shot of one man waiting for a train in the Oxford Circus tube station. The photos from that shoot will go into ad spaces throughout the station (without any branding on them).Each weekday during rush hour, for the duration of the images display (late August), the actual man depicted in the photo (in the same clothes as he wears in the photo) will be in theOxford Circus underground waiting for a train that he never boards.

As people arrive at the platform they will see the photos of the man in the ad space(s) and might recognize him waiting on the platform. As everyone boards the train and empties the platform, the man would be left standing there alone (much as in the picture). By destabilizing the viewers perception of both the image of the man and the man himself this project creates an uncanny simultaneity between the space of advertising and the space of life, what is past and present.

I saw your website and love the work you do. The project is on a really fast track and needs to be shot late this week, early next. Let me know if this might be of any interest to you.

I can be available via Skype or email to give you more details if you’d like.

I love this idea!

It’s good that you wrote when you did. I had a few different jobs come in today and I’m in the process of getting them scheduled but I would so love to do this that I can bend everything else around it.

Do you have ‘The Man’ cast yet? Do London Underground know about it? They are very strict on shooting anywhere on the tube. If we have permission then that is great but it’s always possible to guerilla it.

Would we see the man from the back? From the front? With the track behind him or would our POV be from the track looking towards him?

Would he be the only man in the picture or would there be many other people?

I have so many questions though it might be easier to talk on the phone. It’s no hassle for me to call you. If you’d like to talk then send me your number.

So, here’s the bigger picture:

San Francisco-based publication THE THING Quarterly has partnered with Levi’s® Made and Crafted™ to produce Moment to Moment, a magazine (of sorts) that happens in real timethroughout the summer, across a broad spectrum of mediums and geographic locations.Through a series of independent but related contributions—all built around the central theme,’Good Things Take Time’, Moment to Moment reminds us about the good things that happen when we slow down and experience the details around us.

Moment to Moment is based on visual artist Dan Graham’s interventions from the 1960’s in whichhe purchased advertising space in magazines such as Harper’s Bazaar and Arts Magazine inorder to create art pieces. The title comes from 19th century French poet Stéphane Mallarmé,who envisioned a three-dimensional book entitled Moment to Moment. He saw it as somethingthat would be performed, rather than read.

The project will consist of over 15 different commissions including online videos, text pieces,paintings, animated gifs, photography, and essays. Some of these pieces will appear onbillboards, bus shelters, subway stations and other outdoor advertising spaces in cities aroundthe world. These public interventions propose a more pleasing visual alternative within the urbanlandscape and prompt viewers to take time for the good things around them. Some pieces will beinserted into the paid advertising space of magazines as standalone works of art. They will bepages from the Moment to Moment project, extracted and repositioned as pages in otherlikeminded publications. The remainder of the publication will be featured online at www.goodthingstaketime.com and in the free printed newspaper which, like the official website, willdocument and share the entire project.

The man on the platform is London based artist, Michael Crowe, who is doing a great project of his own called Mysterious Letters.In order to get far enough away and realistically photograph him on the platform of the southbound Bakerloo line platform at Oxford Circus required permission to go into the station at night, after 1am, when it had closed, the power had been switched off on the track and position the camera there. An underground station is an eerie place when it’s closed. All I could think of was ‘An American Werewolf in London’. 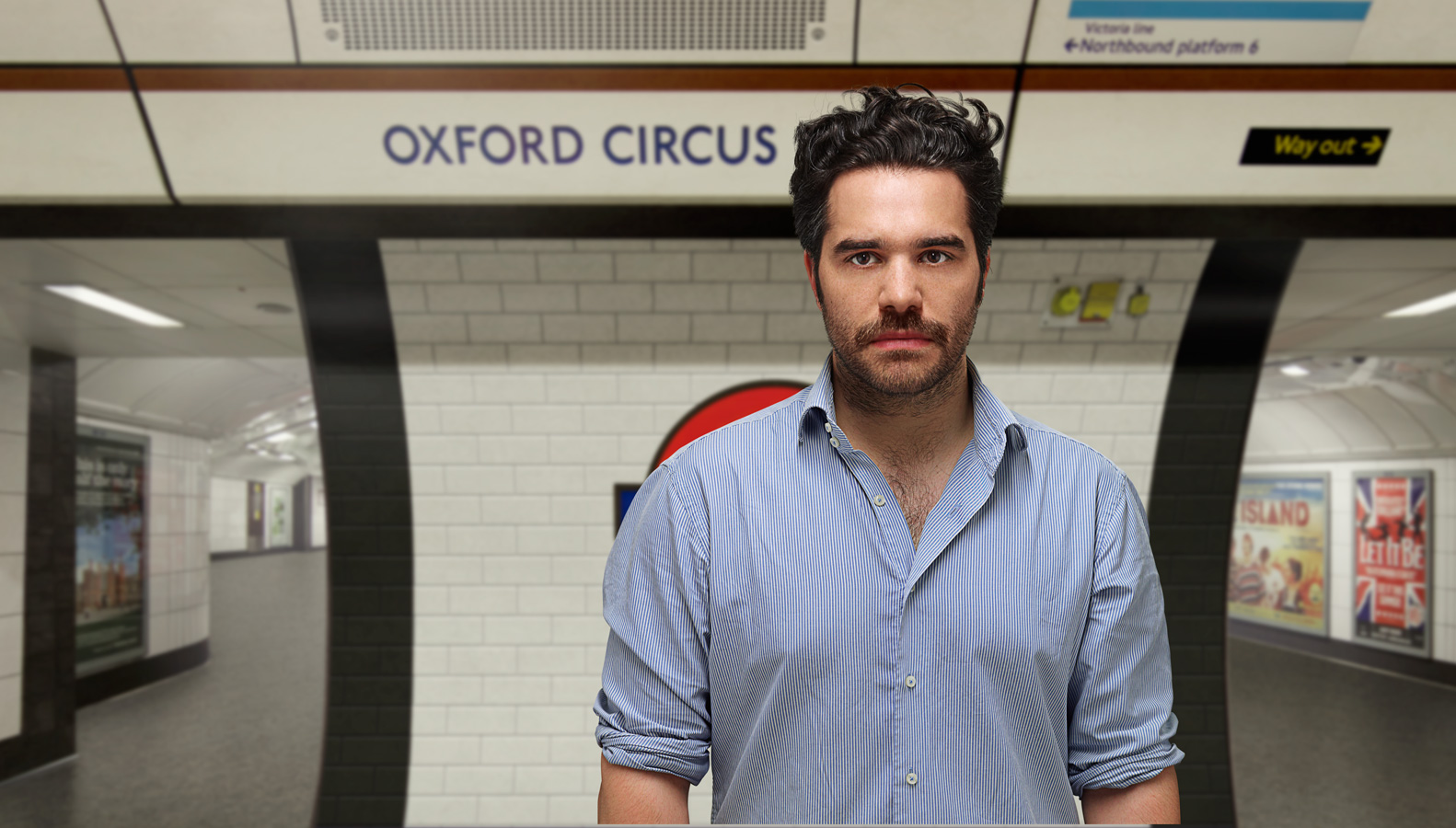 Jon Rubin has created a site for the project here.

This is his statement:

Part One: Multiple advertising spaces in the Oxford Circus Underground will show a photograph of a man seemingly waiting for a train. The photo will be stark and beautiful, the man’s face filled with gravitas. No one else will be in the photo but the man.

Part Two: Each weekday during rush hour, for the duration of the images’ display, the actual man depicted in the photo (in the same clothes as he wears in the photo) will be in the Oxford Circus Underground station waiting for a train. He will not board any train. As people arrive at the platform they will see the photos of the man in the ad spaces and might recognize him waiting on the platform. As everyone boards the train and empties the platform, the man will be left standing there alone (much as in the picture). As their train pulls away from the station people might recognize the lone figure as the lone figure they saw in the ad spaces.

Part Three: Each day the man will write in a notebook things that he hears other people on the platform saying, including any questions or statements directed at him. This writing will be presented on this blog. 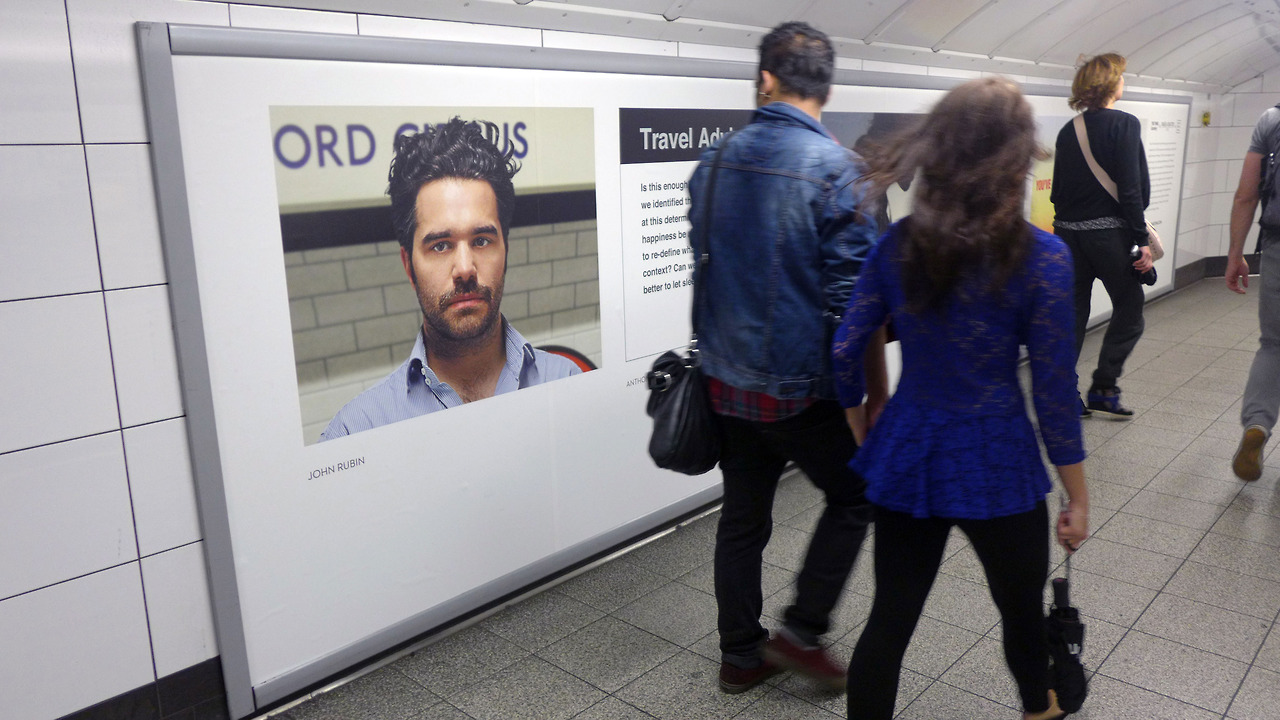 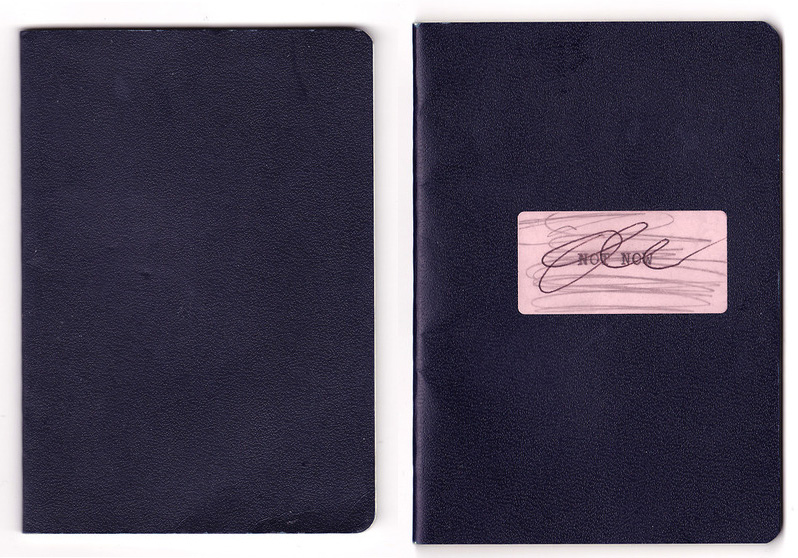 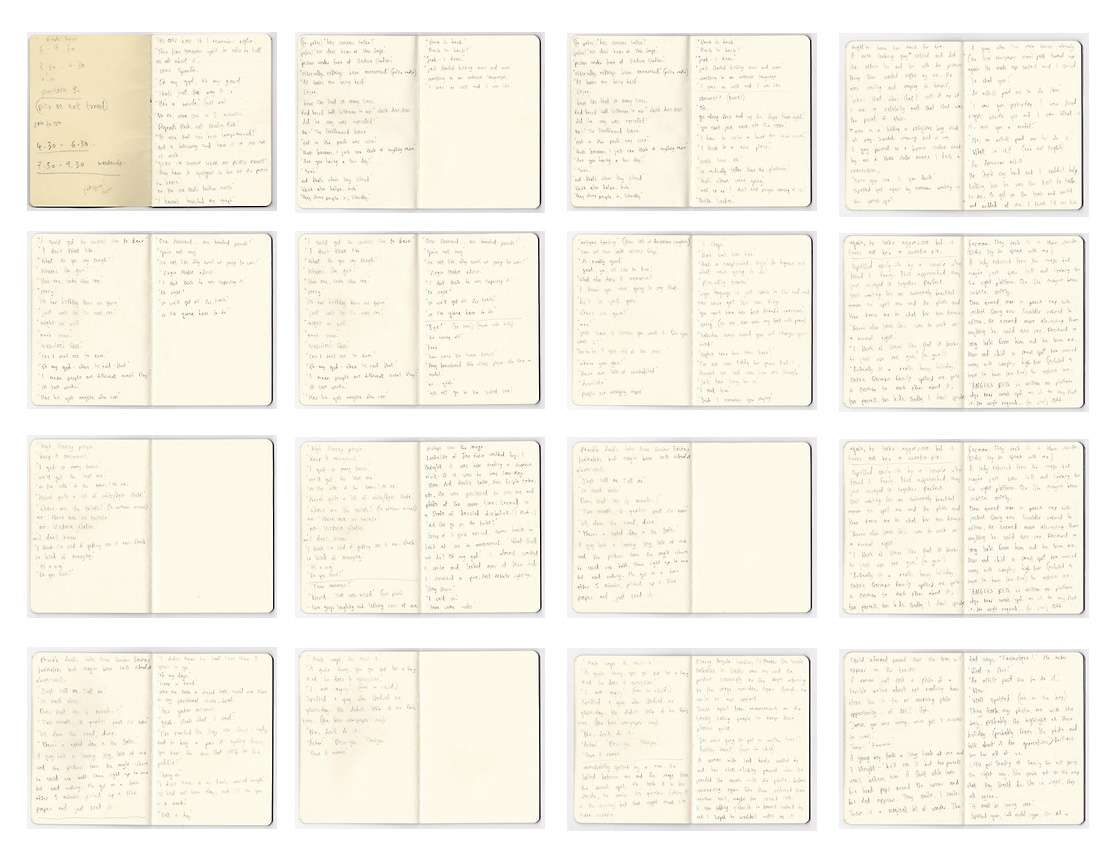 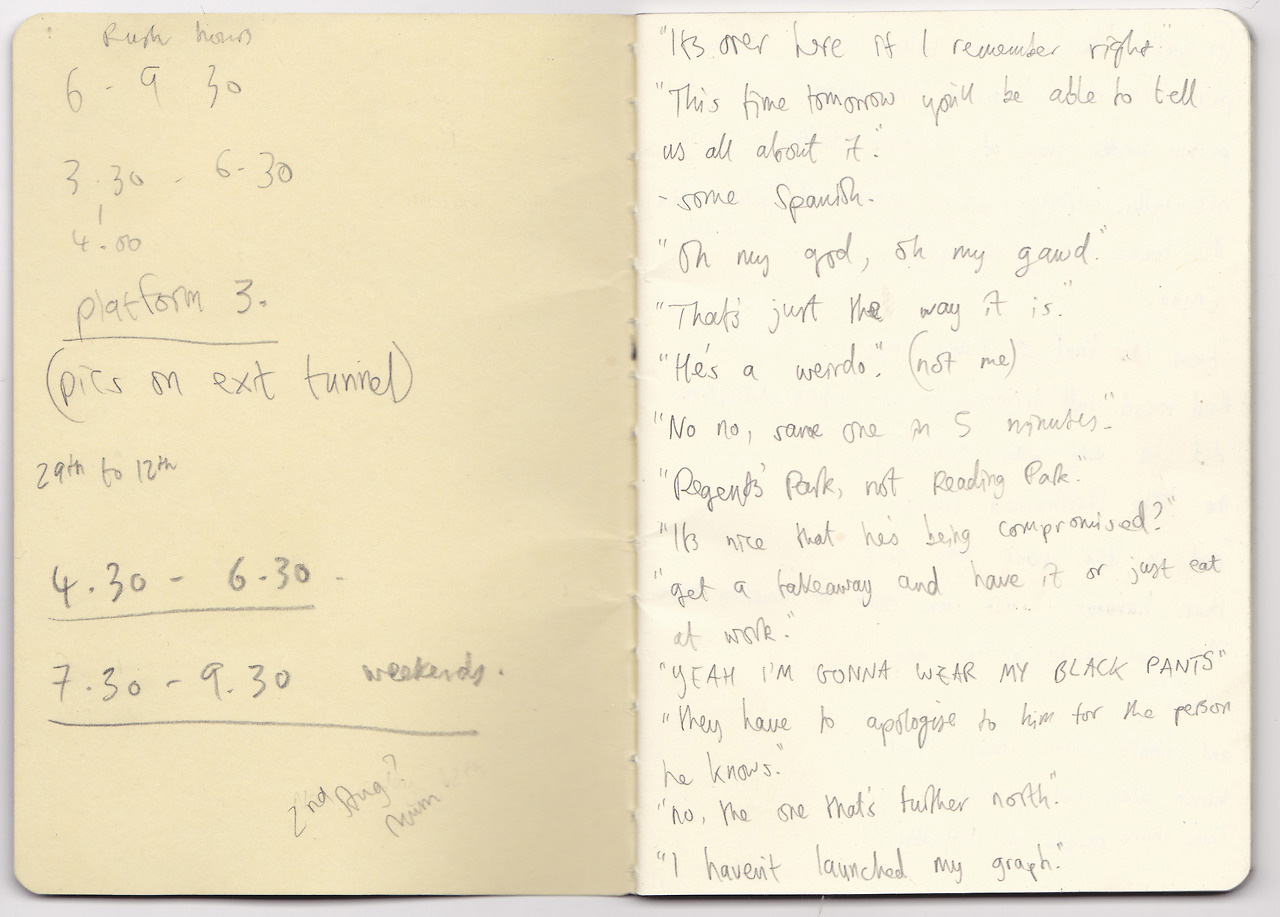 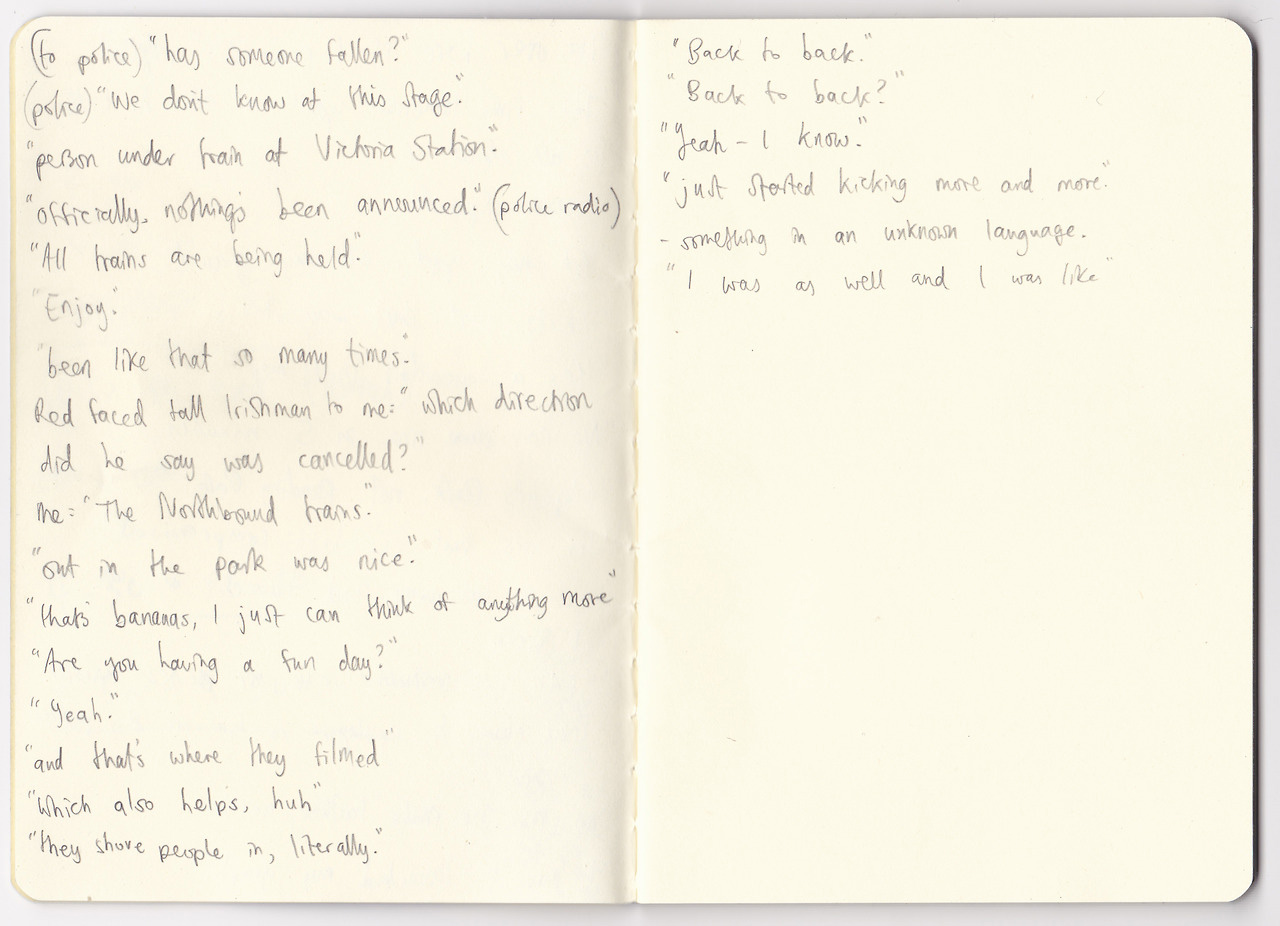 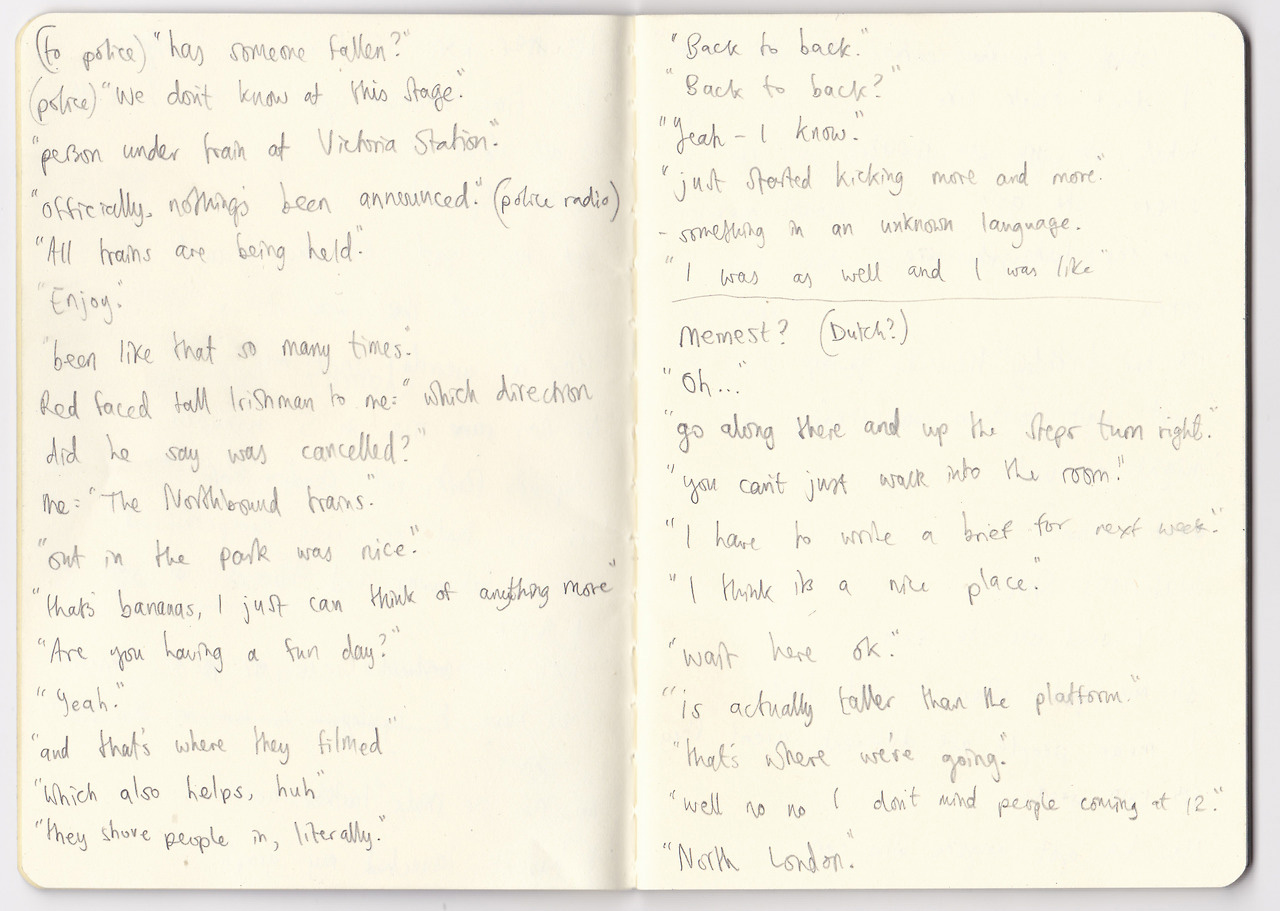