We are in a prime piece of four storeyGeorgian Mayfair, on the first floor, the second floor if you are American. The place attracts a multinational crowd. It’s not an art gallery. It’s a fine art gallery. As I said, a multinational crowd. Cultured people with good legs and fine watches. I am here to photograph Ronald David Wood. He is the artist in residence at the gallery. Up on the top floor is his studio. It has all his paints, his brushes, his canvases, a snooker table, and although he’s not actually living here, a huge bed should he wish to take advantage of the resources and crash for a while. Later on I make a joke about how handy this must be if he doesn’t have enough money in his pockets for a cab back to Holland Park, especially after a big night out in the West End. It went right off the cliff. Sometimes I worry that I get too subtle at the key moments. I’ve been doing it for years. 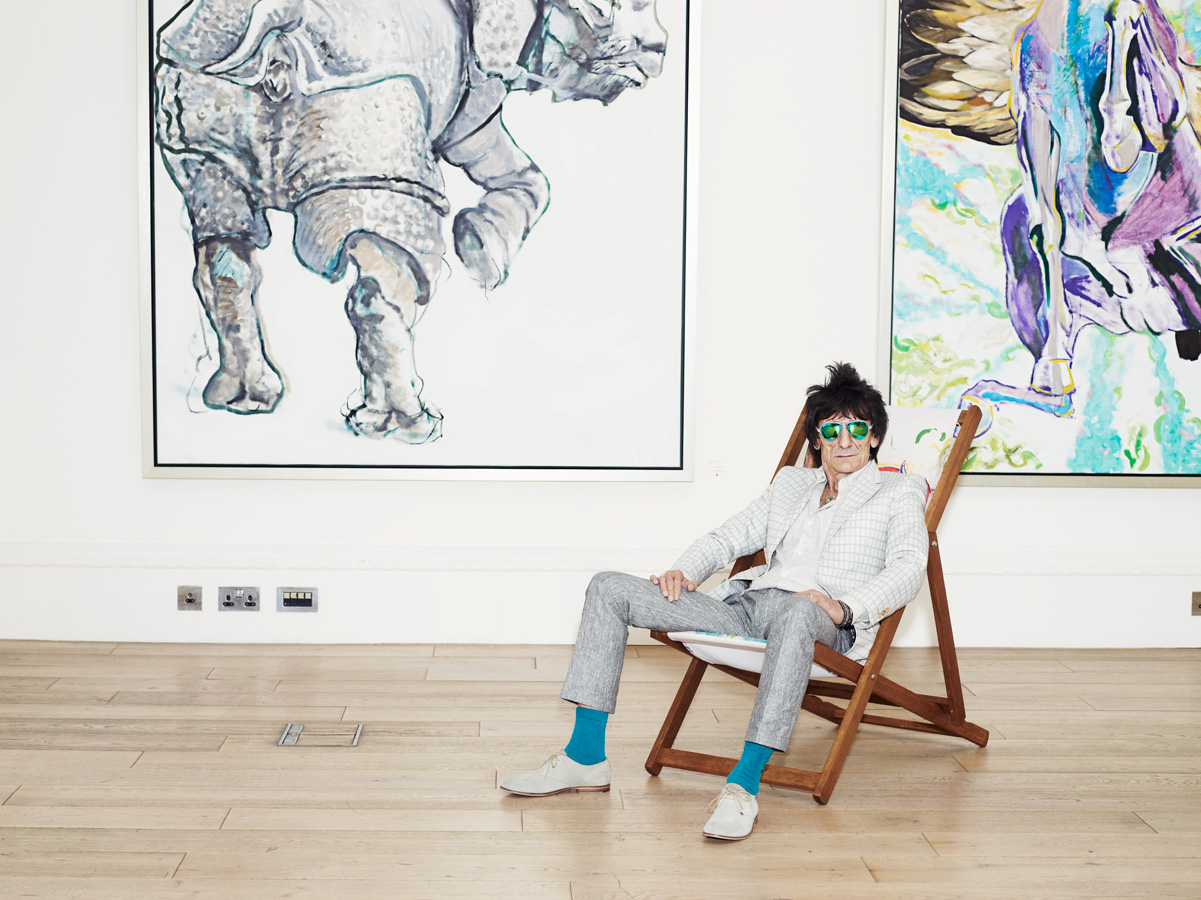 Everybody who works here calls him Ronnie. They tell me what to expect. Ronnie likes to be involved in the creative process. Ronnie doesn’t like to dwell on things for too long, Ronnie does tend to get bored. That’s ok, I say, I get that a lot.Wherever I go in the building, on any of the four floors, the music of The Rolling Stones plays continuously. All the hits from the last half century.

We bring in our equipment from the car outside. It’s the hottest day of the year. Thirty six degrees centigrade. The lunchtime streets of Mayfair buckle under the weight of the heat but back inside the fine art gallery the cool air of wealth wafts over all of us from the air conditioning vents.

I set up two different shots simultaneously, so that we can wheel Ronnie from one seamlessly to the next, without losing him to boredom somewhere in between. The most important element is to not give them time to think. If you do that they will always choose to slip away, wander off, disappear. In summary, they will do one. Why? Because when you’ve been in The Rolling Stones for almost forty years you will have had your picture taken tens of thousands of times. There is nothing interesting about it, nothing new, nothing to cause you to think. Having your picture taken for a magazine cover is like what a Payment Protection Insurance cold call is to us. On the whole, you don’t want to be rude but if they go on past a certain point you’re just going to hang up and not feel guilty about it 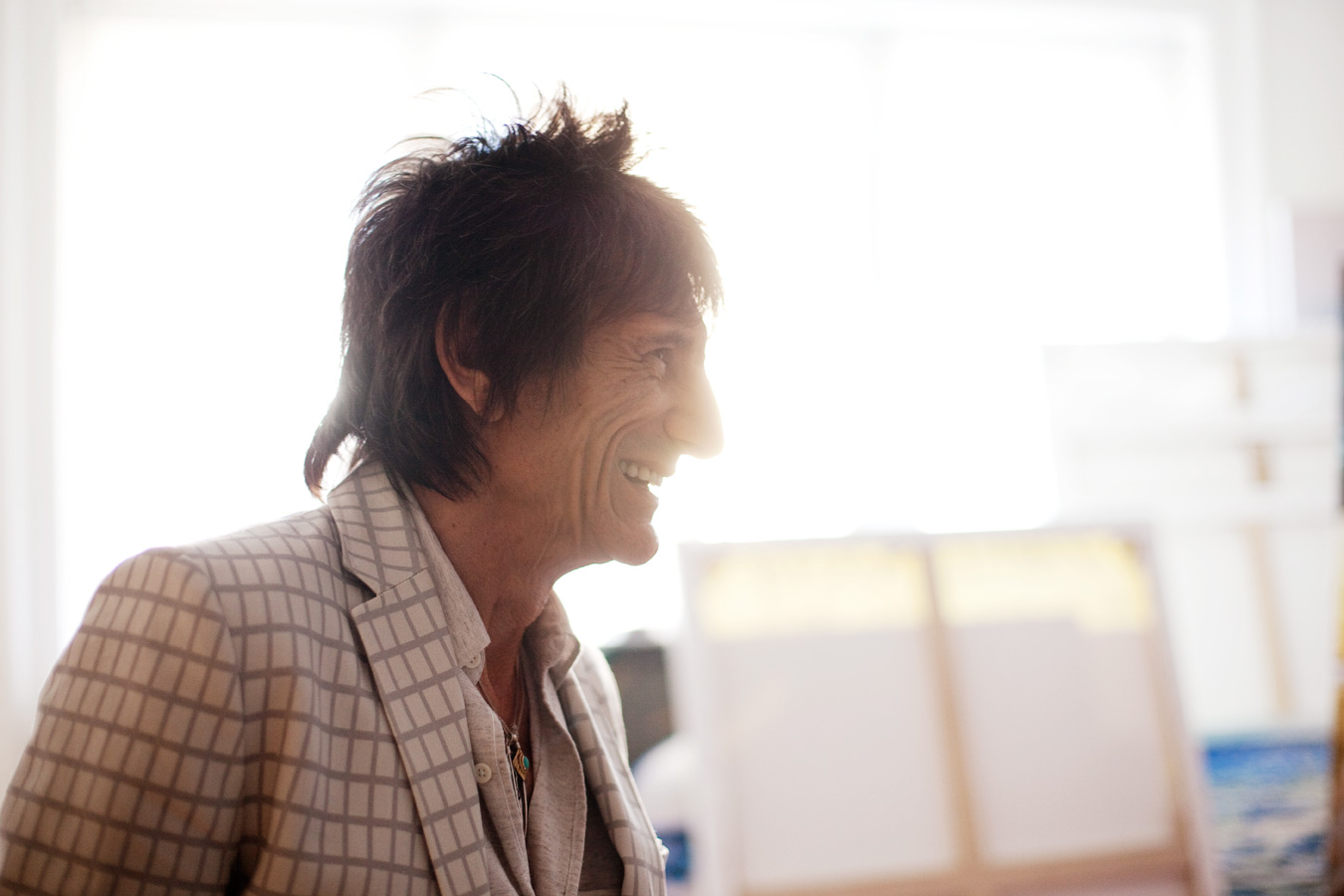 Sight, target, engage. It’s a military situation. There’s no mirror, signal, manoeuvre here. Whatever it takes. As one gilded Stones hit fades away and a new one immerses us in it’s familiar scent, a thought comes into my head. A question for Ronnie. Yes, can I ask you something, Ronnie?

“Yeah man, as long as it’s not about The Faces”

I gesticulate to the speakers, to the music.

“Well, when you go somewhere, a bar, a pub, a restaurant, a shop, a cab and you hear a Stones song on the stereo, the radio, well, what do youhear? What do you hear that we don’t hear?”

The opening bars of ‘Gimme Shelter’ are washing down over us. Ronald David Wood cocks an ear, his body comes up on it’s haunches as he searches the spectrum for the signal. The only thing missing from this familiar posture is a guitar. The apocalyptic, heart of darkness groove of my favourite ever Stones song cascades down in a torrent over us:

“Oh, a storm is threat’ning

Ronald David Wood finds the signal or, more correctly, the signal finds him and his arm starts to move, followed quickly by his hips. He loses himself in it for five, maybe six seconds, locked inside. Then his head slowly comes up, he pulls his Ray Bans down his nose an inch and his black, black eyes look at me for a second before his nineteen fifties, post war, Hillingdon ration boy face breaks into the slyest little smirk you’ve ever seen, and he says: 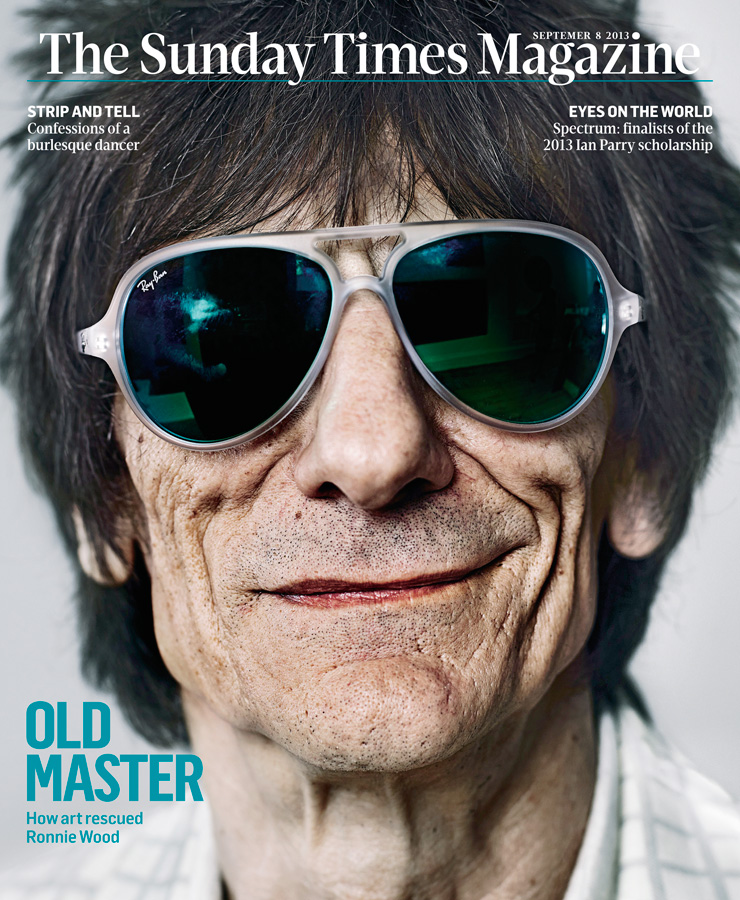