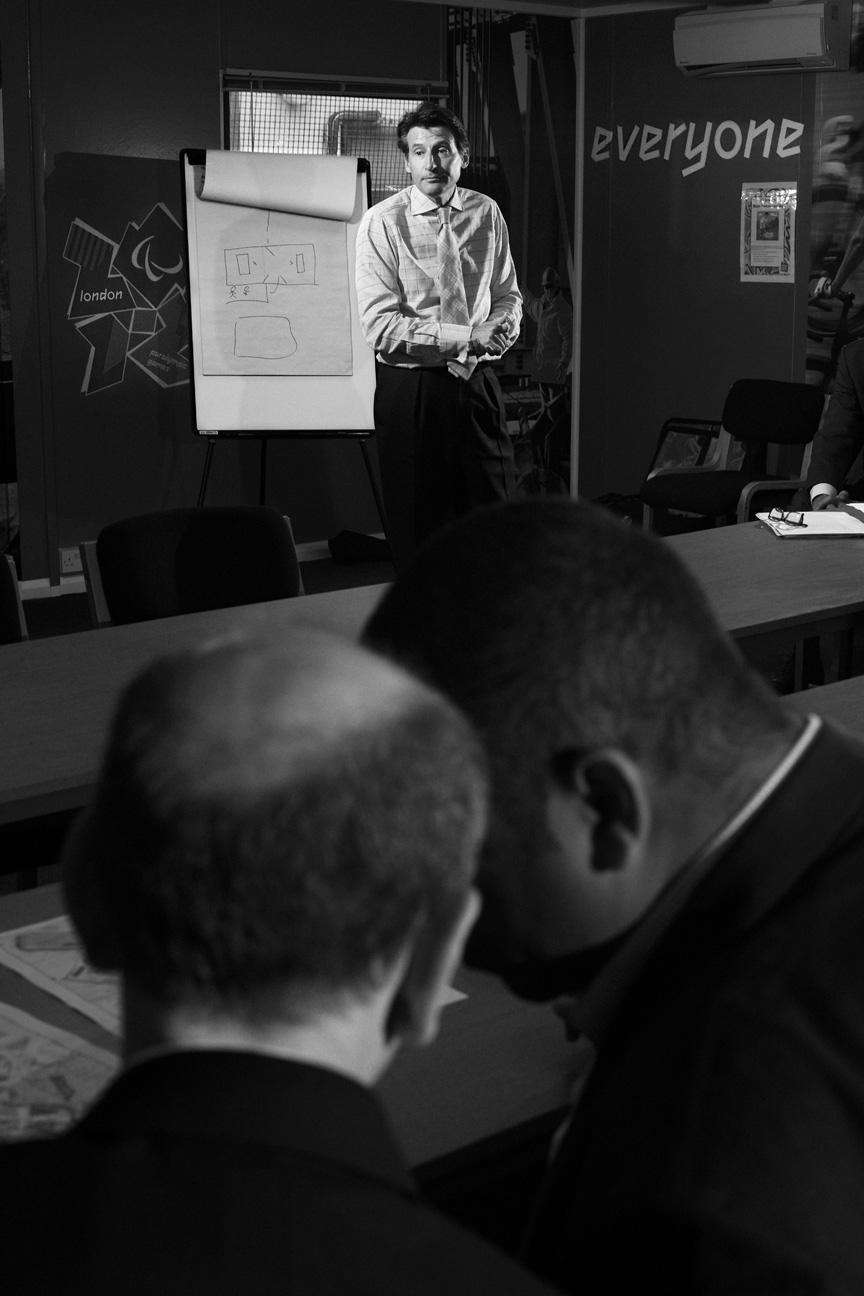 Seb Coe making his case to members of the Greater London Authority in a portakabin at the Olympic Stadium site, 2008. Note the detailed diagram beside him.

Now seems like a good time to post these pictures. Tonight is the opening ceremony of the 2012 London Olympic Games and this story is a long way in the past indeed. In 2008 I was commissioned by The Observer to spend a week with Sebastian Coe while he carried out his business as the man in charge of London’s bid. 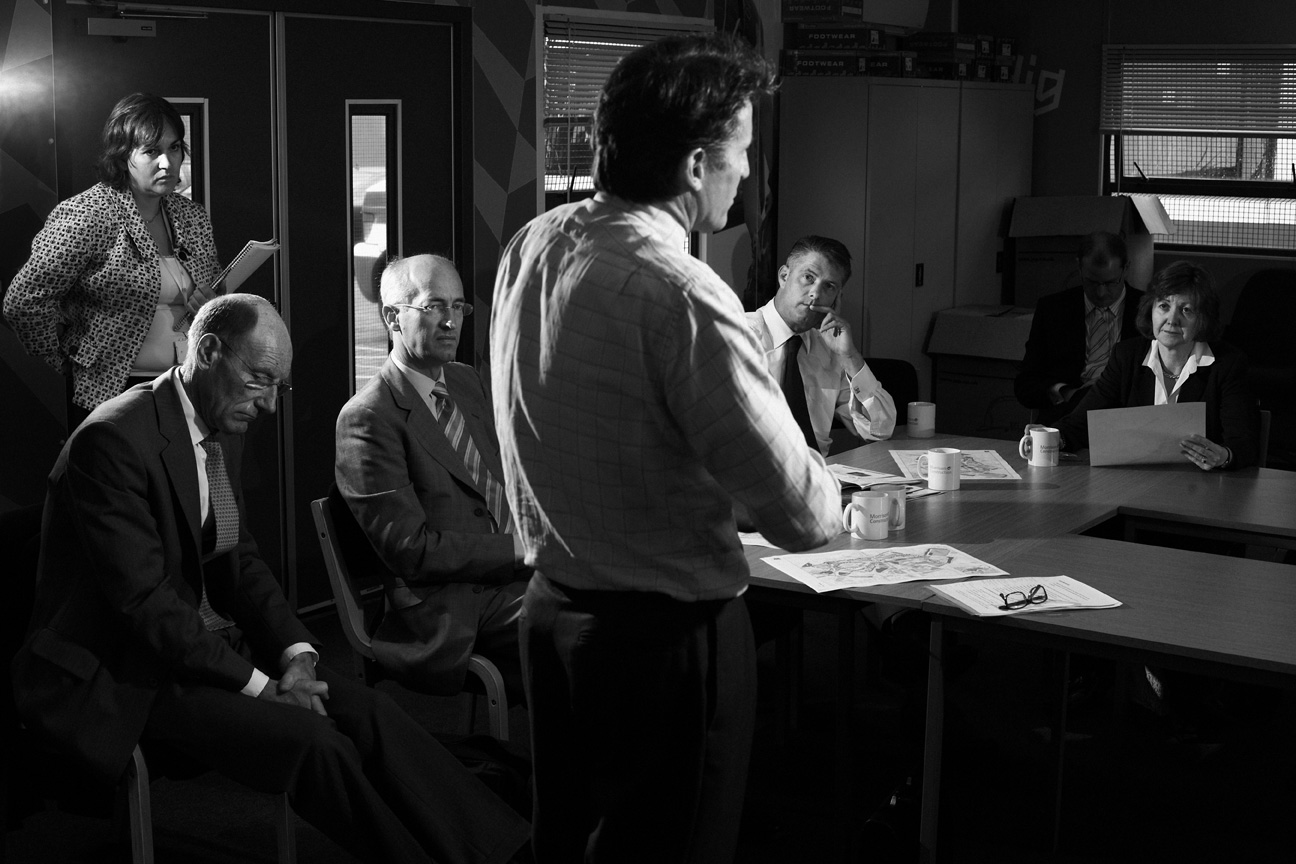 Seb Coe making his case to members of the Greater London Authority in a portakabin at the Olympic Stadium site, 2008.

For 7 days, journalist Tim Adams and I went everywhere he went. We didn’t speak too much but he never tried to stop me photographing anything. I sat in on sensitive meetings and he was always welcoming whenever I arrived anywhere to shadow him. The part that had the biggest impact on me, however, was the realisation that every place he went he had to deal with doubt, cynicism and scrutiny. I know that as we approach the start of the games there has been some anger at some of the cock-ups that have happened but I honestly believe from watching Coe, over the course of one week in 2008, his entire drive and motivation came from a desire to pull off something fantastic. I hope he does and I wish him and everyone involved the best of luck. 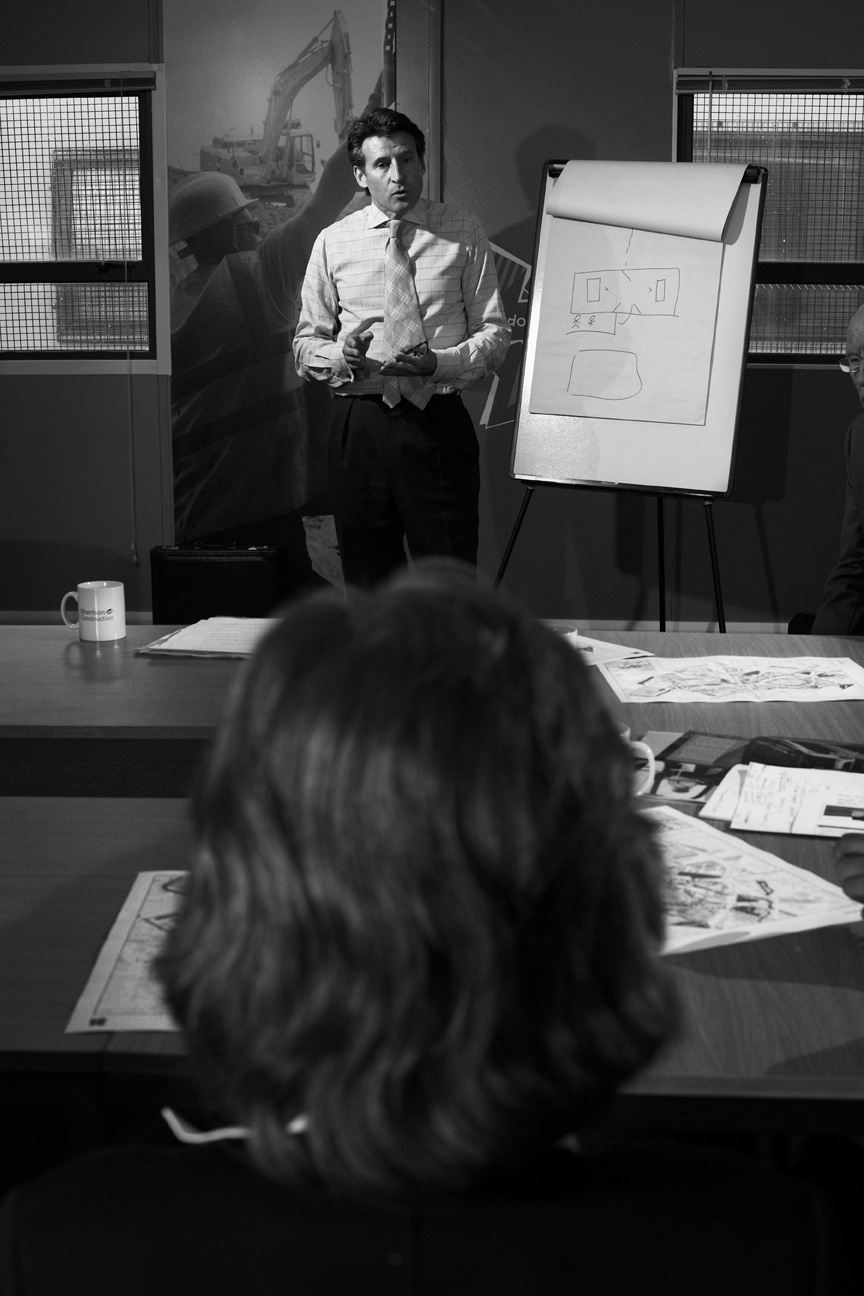 Seb Coe making his case to members of the Greater London Authority in a portakabin at the Olympic Stadium site, 2008.

My favourite pictures from this story are those above, taken at a meeting with the members of the Greater London Authority in a portakabin at the site of the stadium, at that time a pile of rubble and earth. Coe had been summoned by the GLA to justify certain budgetary matters. The item at which the members were most indignant was a line allowing for provision of several thousand car parking spaces for ‘media’. Coe explained patiently that ‘media’ carry a lot of heavy stuff – cameras, sound equipment, tripods, lights and if they were made to carry it in then they just would not turn up. I stood behind him nodding fervently, whilst indicating my lighting set up. He had told me before we went in what this was about, so in the short time I had to prepare I decided to try and light the room as a scene from the Henry Fonda movie, ‘Twelve Angry Men’ – which is set almost entirely in a jury room as the verdict of a case is debated and Fonda passionately argues his view to the other eleven members. The pictures here do seem like the countdown to an execution and Coe came out of the meeting quite depleted. 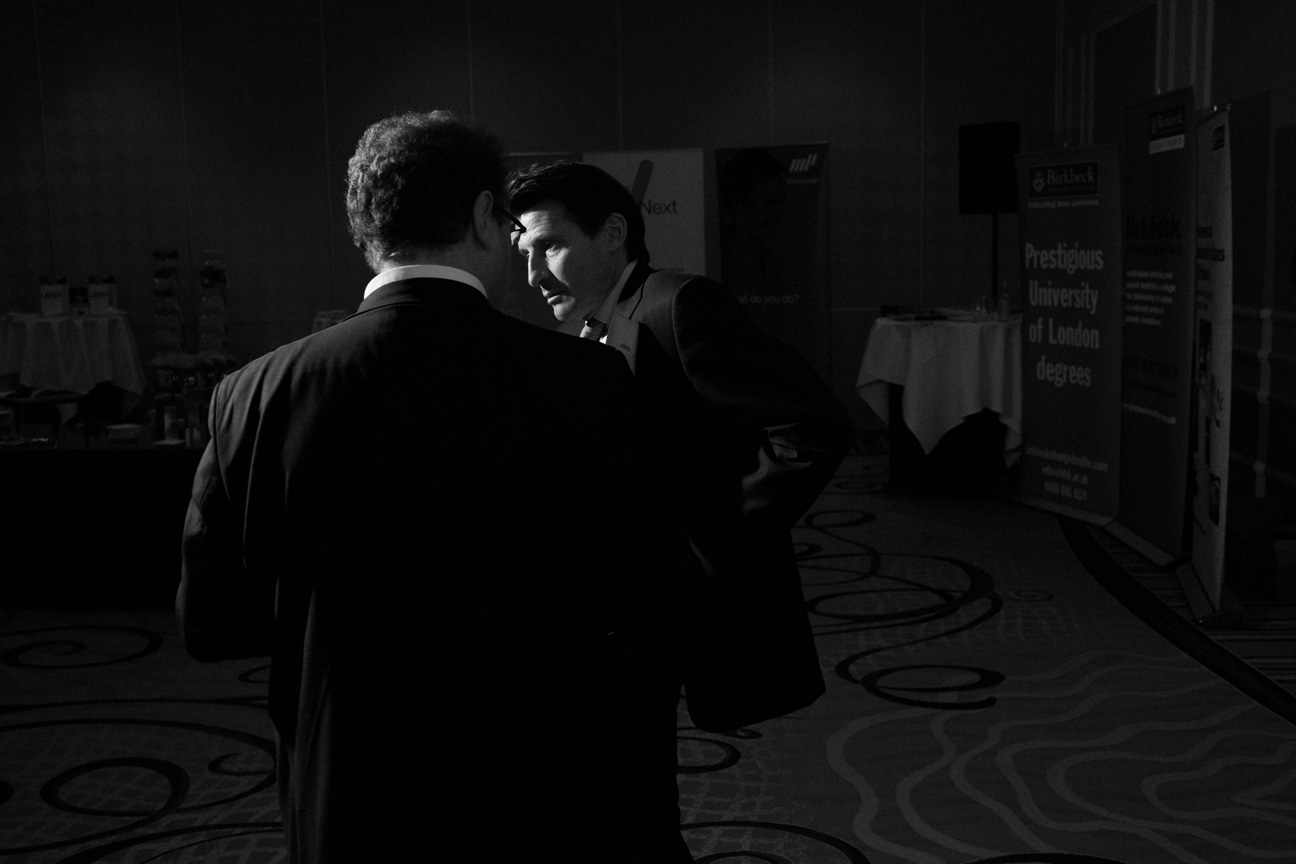 What I want the viewer to see in these photographs is a glimpse of the sheer relentless mountain climb of a task the man has before him. Remember that this is an extract from one week in his life, four years ago. It was like this every day for the the four years before that and it has been like this, probably more so, every day for the four years since. What was obvious from observing him was the way he paced himself through the day. Really, truly fascinating to watch. 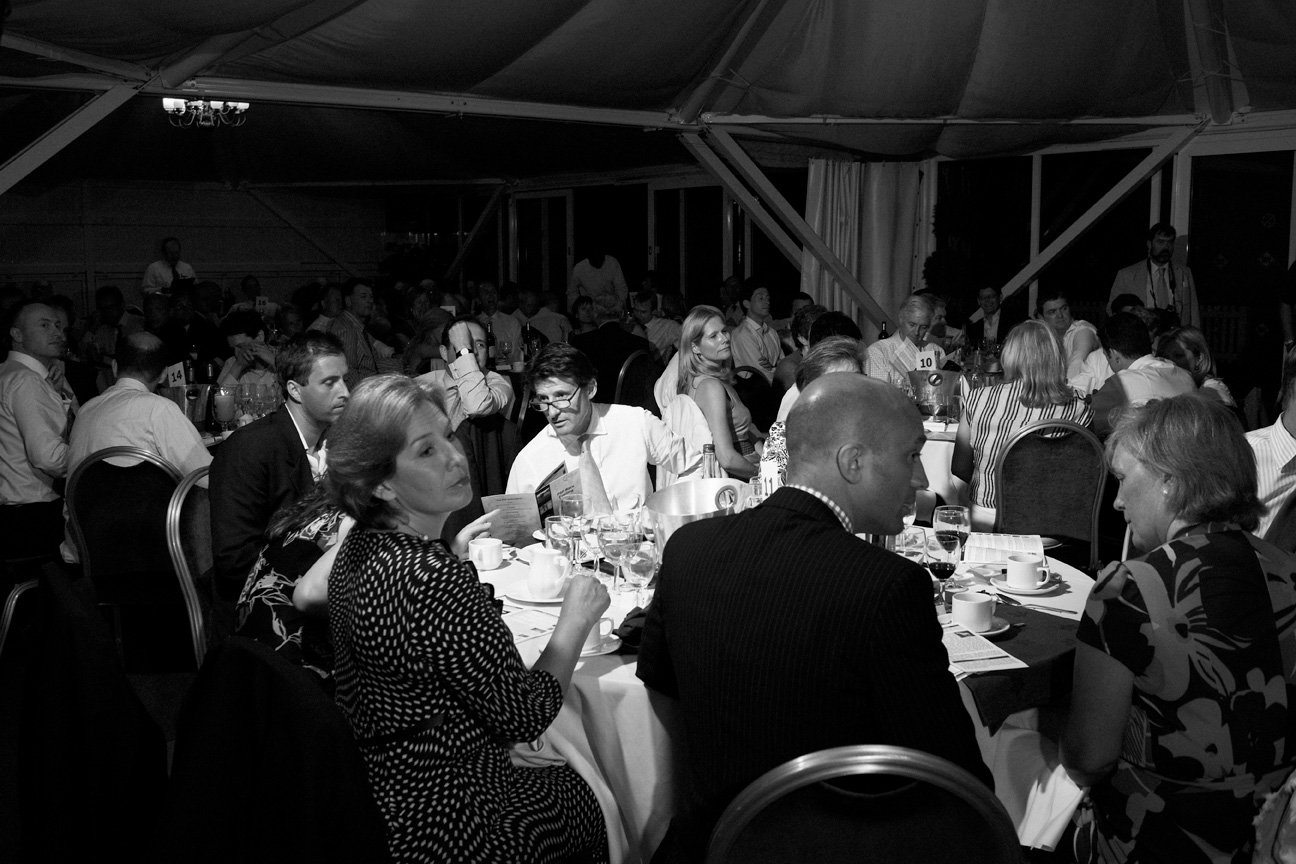 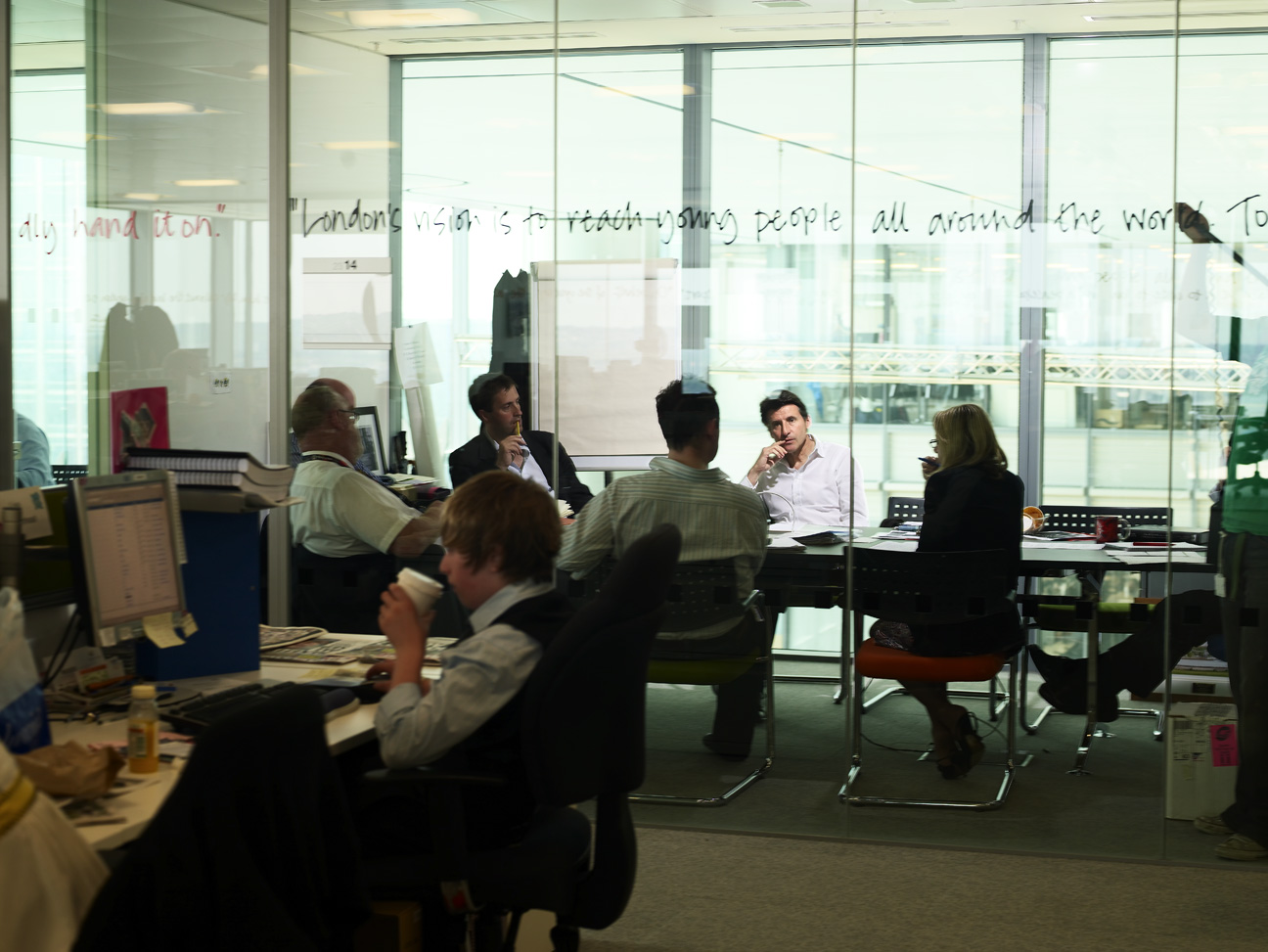 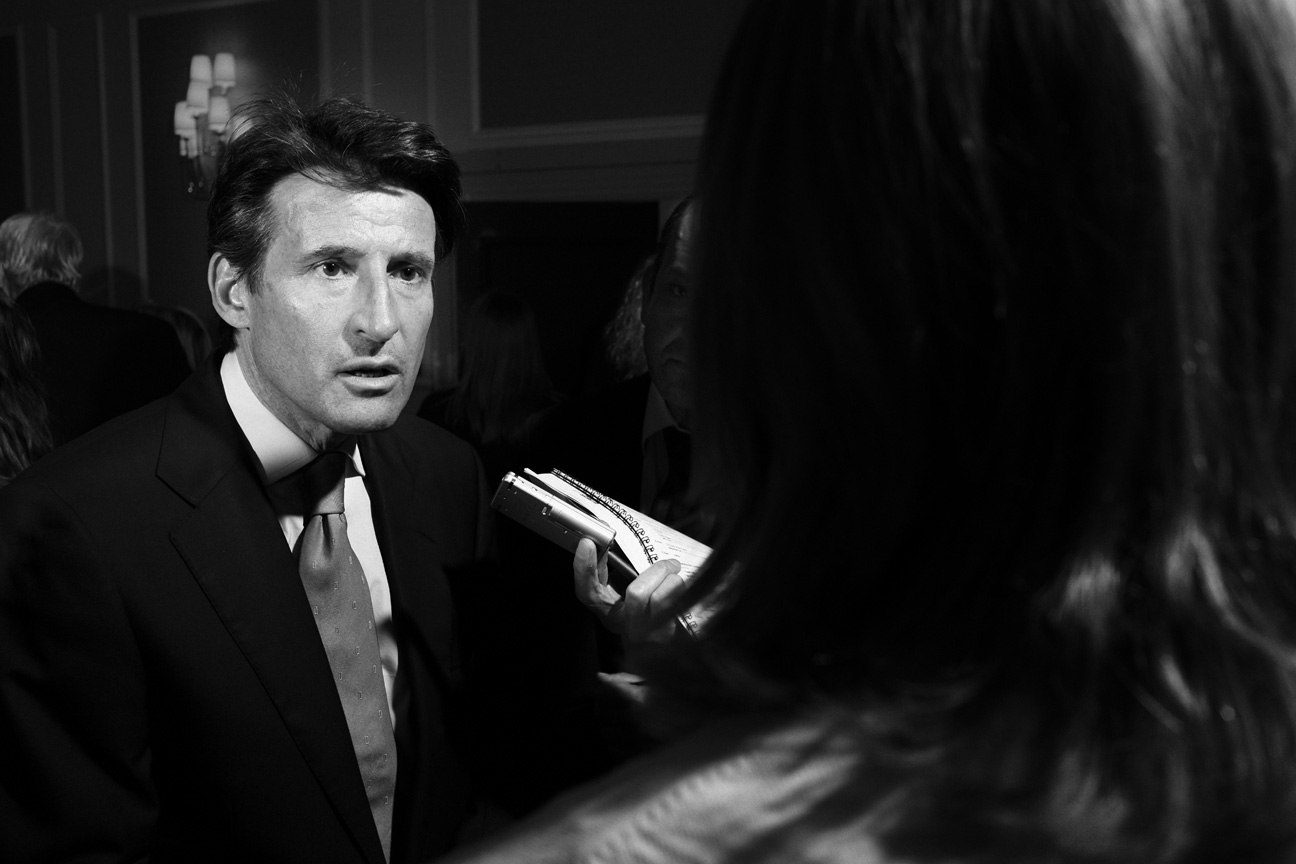 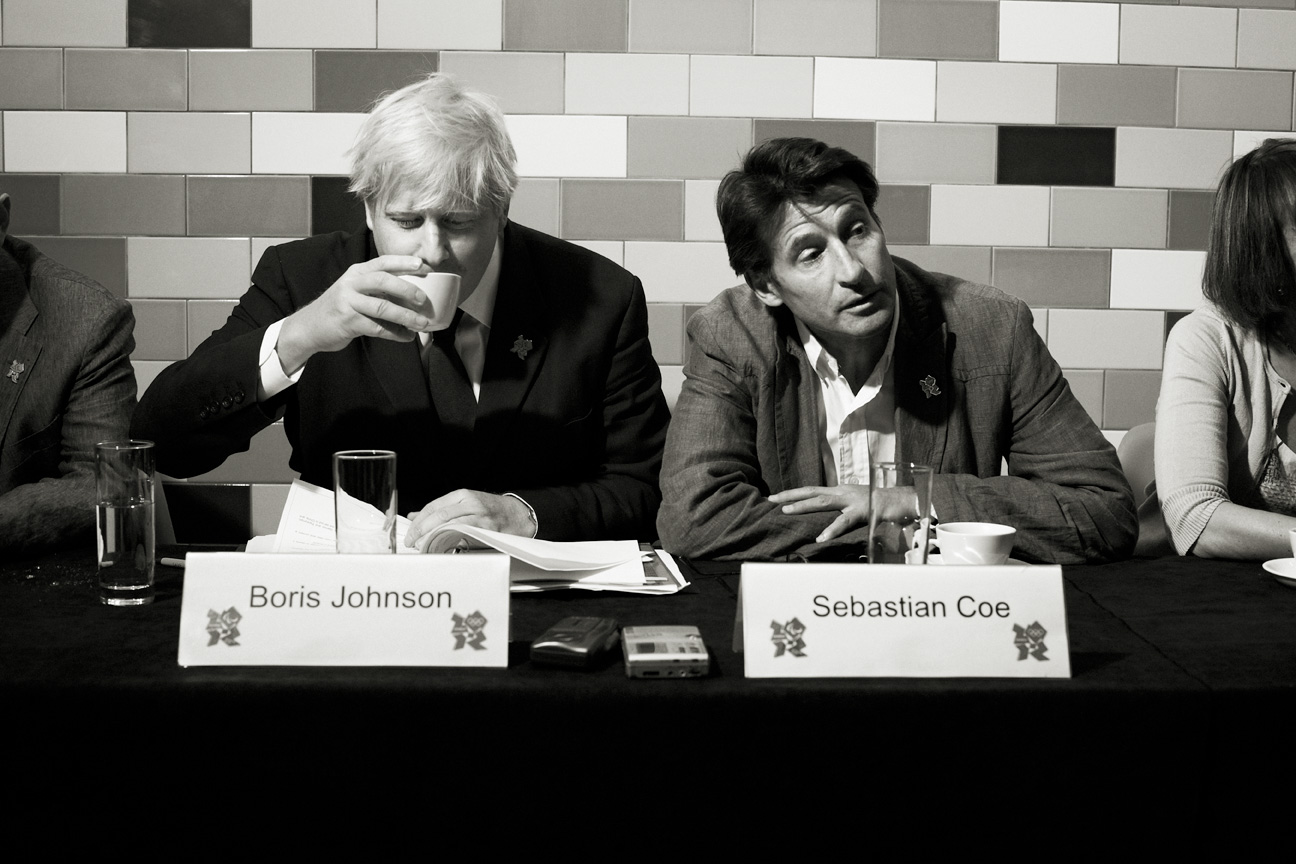 Press Conference at The ICA with Mayor of London, Boris Johnson. 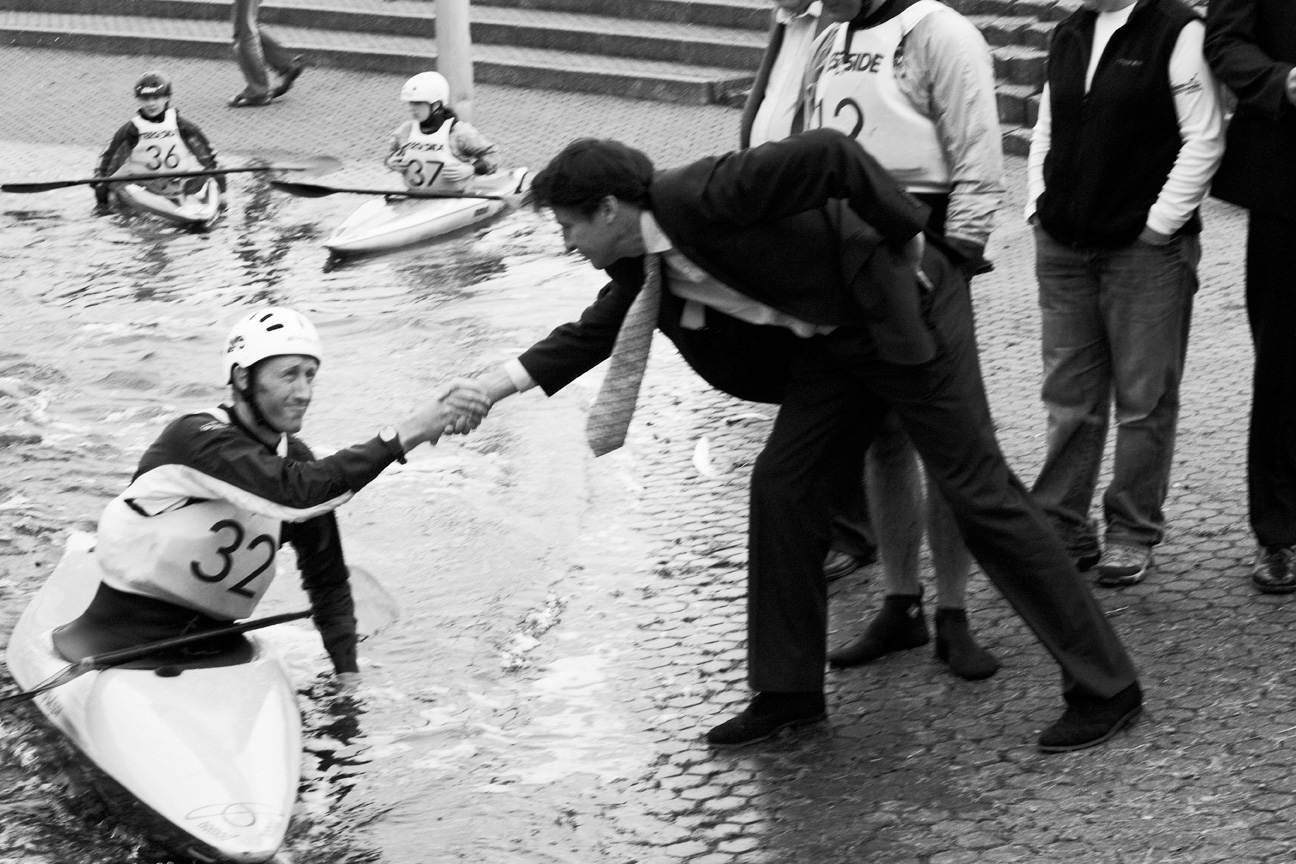 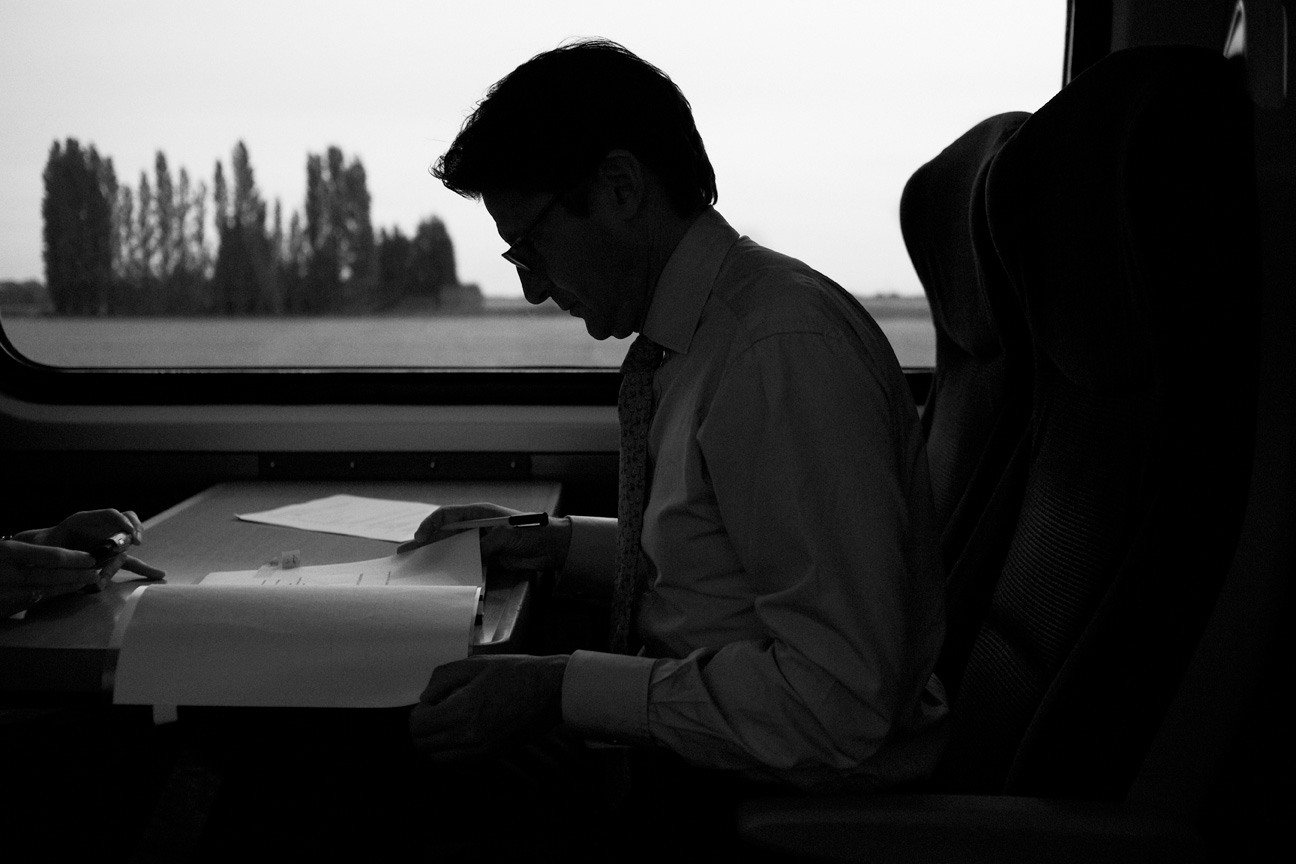 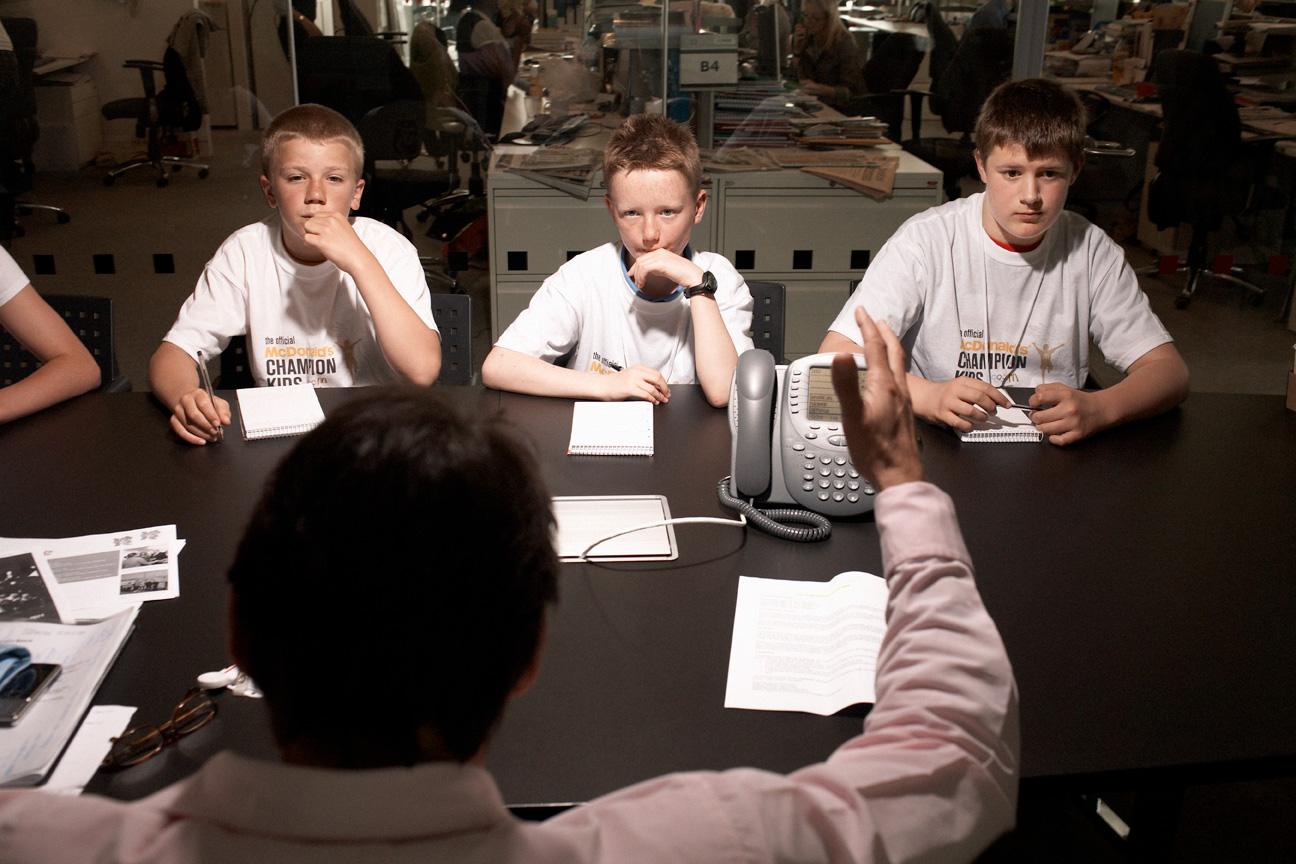 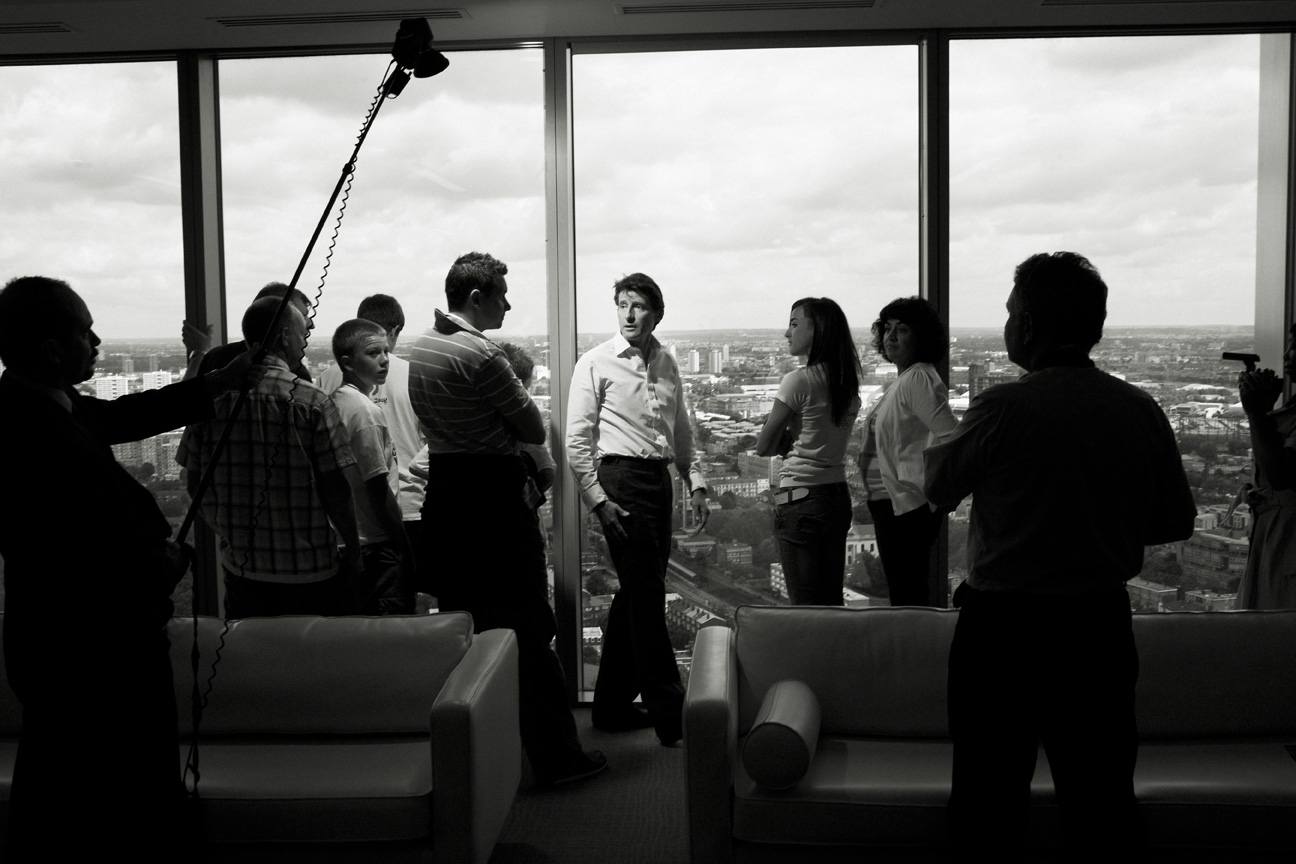 Looking towards the stadium 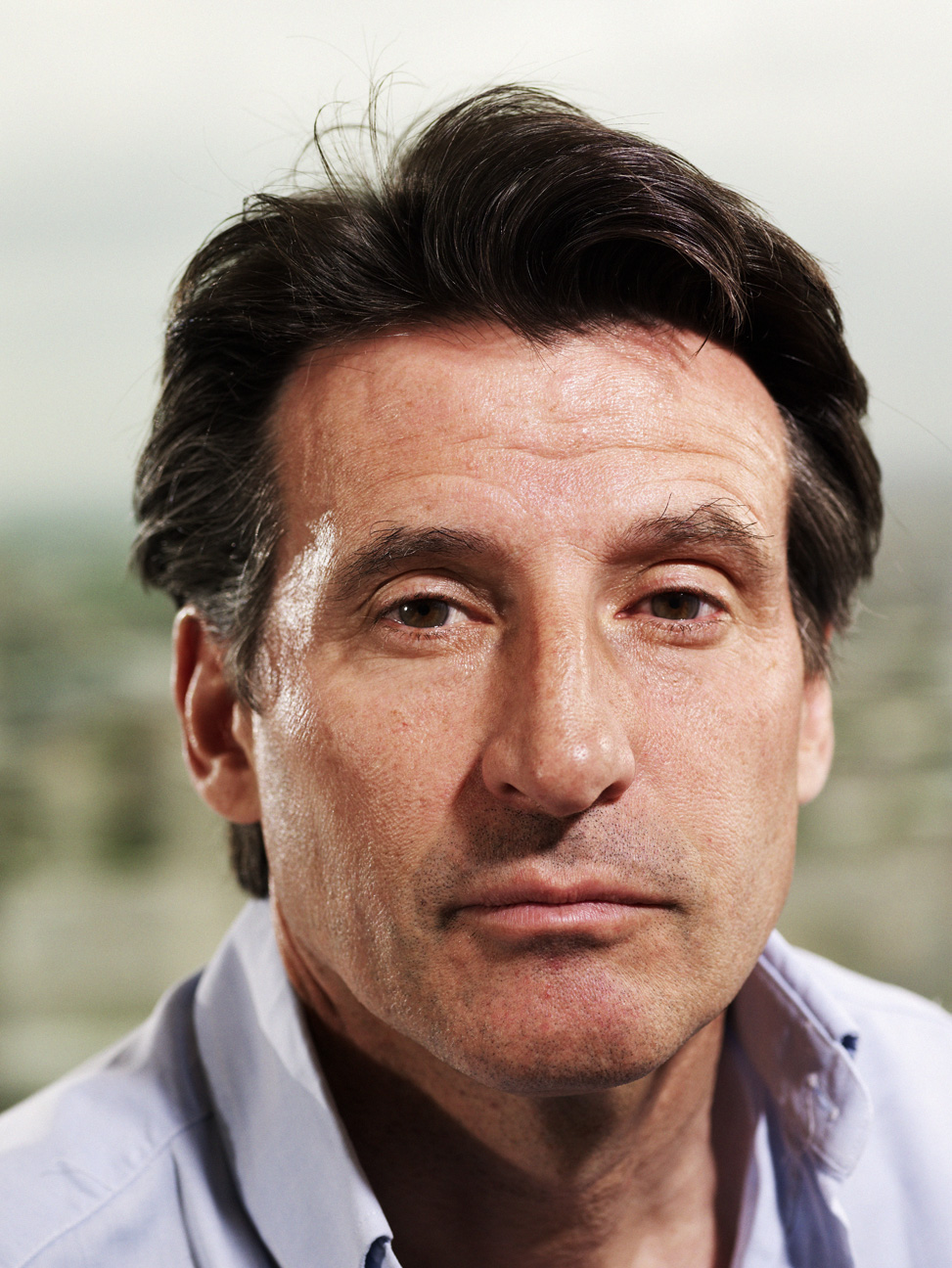