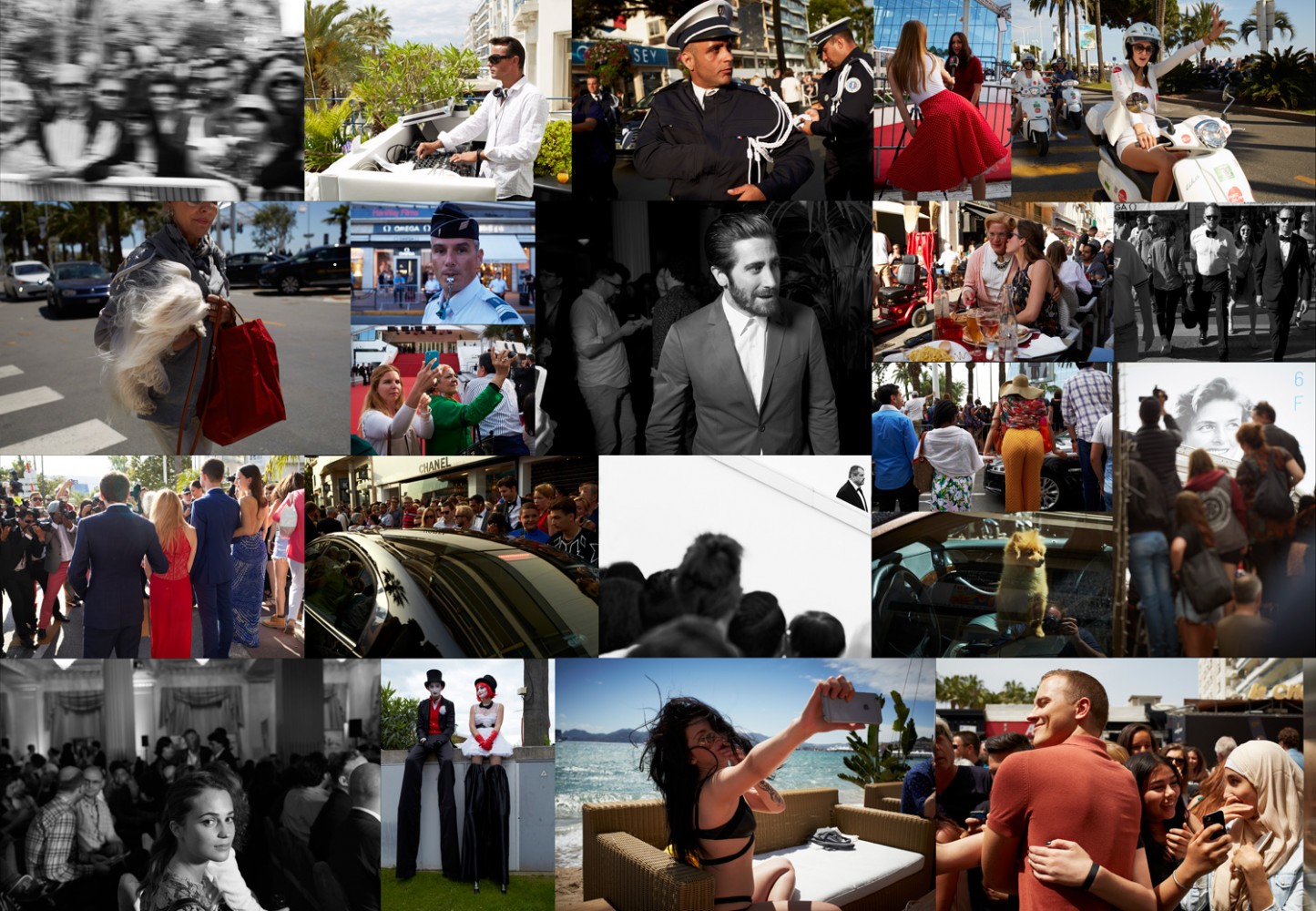 I’ve been to the Cannes film festival twice, in 2008 and again in 2015.  The first time was a ridiculous 12 day whirlwind for a French magazine, in which I later calculated that I produced 91 portraits. Each one a proper sit down meal. Robert, my assistant, and I travelled down from London on the train with several cases of equipment and lights. It’s always nicer to arrive by train. We are civilised people, this is how it should be done.

Within a day of arriving we realised that trying to cart all this stuff around was futile and that we needed to adopt a more mobile method of working. With all our gear minimised to the bare essentials and now crammed into two backpacks, each of us on a rented Vespa, we spent every day maniacally rushing from one appointment to the next, urged on by our French fixer, Cedric, who sat in the apartment we shared setting up each shoot. We’d be down at the Palais at 11.15 to photograph Mike Tyson as instructed, just getting into the groove, when a text would come through from Cedric, “Drop everything and go to the Carlton immediately. You have an appointment with Angelina Jolie at 11.30.” 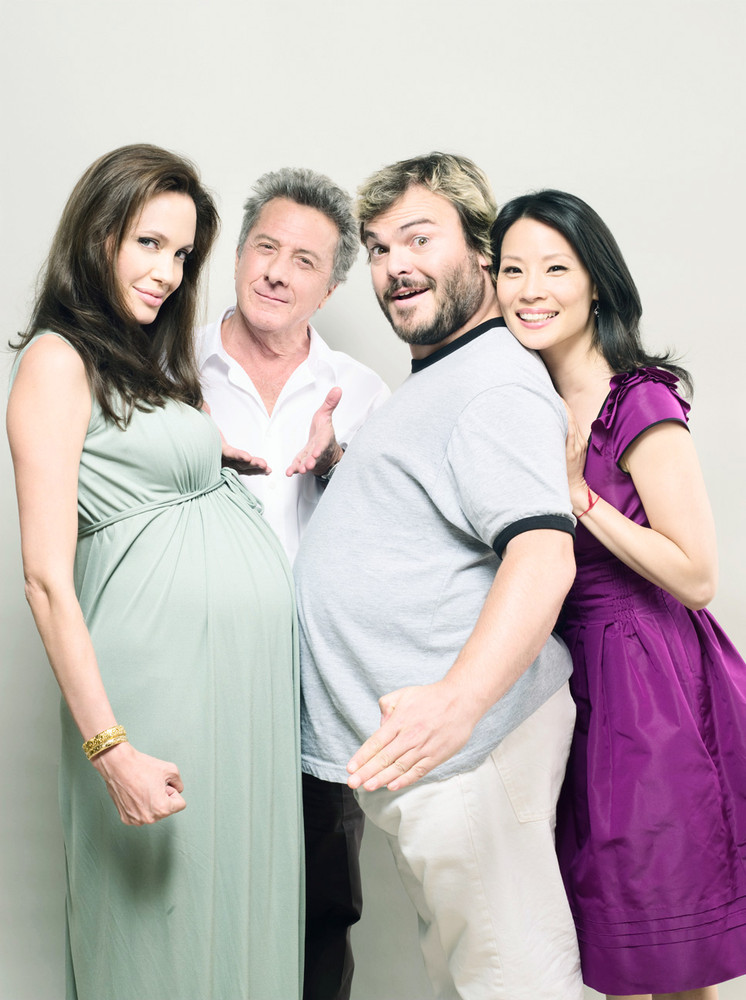 When I took the picture above, shot in a penthouse suite on the top floor of the Carlton Hotel in 2008, there were probably 30 people in the room right behind me, willing me to hurry up. The four actors were in town to promote the newly released animation, ‘Kung Fu Panda’, to which all of them had voiced various characters.  After the shoot with me they were proceeding directly to the premiere downstairs at the Palais. Outside the hotel was the most insane crowd of star spotters I’ve ever seen. All the way from the front of the Carlton to the red carpet was a sea of pre selfie stick humanity.

When Jack Black agreed to my suggestion to go toe to toe with the eight months pregnant Angelina Jolie there was an incredible energy in the room as this unscripted moment came to pass.  A second or two later Jeffrey Katzenberg, the boss of Dreamworks and one of the most powerful people in Hollywood, leaned into my ear from behind me and whispered,

“You just got the million dollar shot, kid, so let’s wrap it up and get the fuck outta here.” 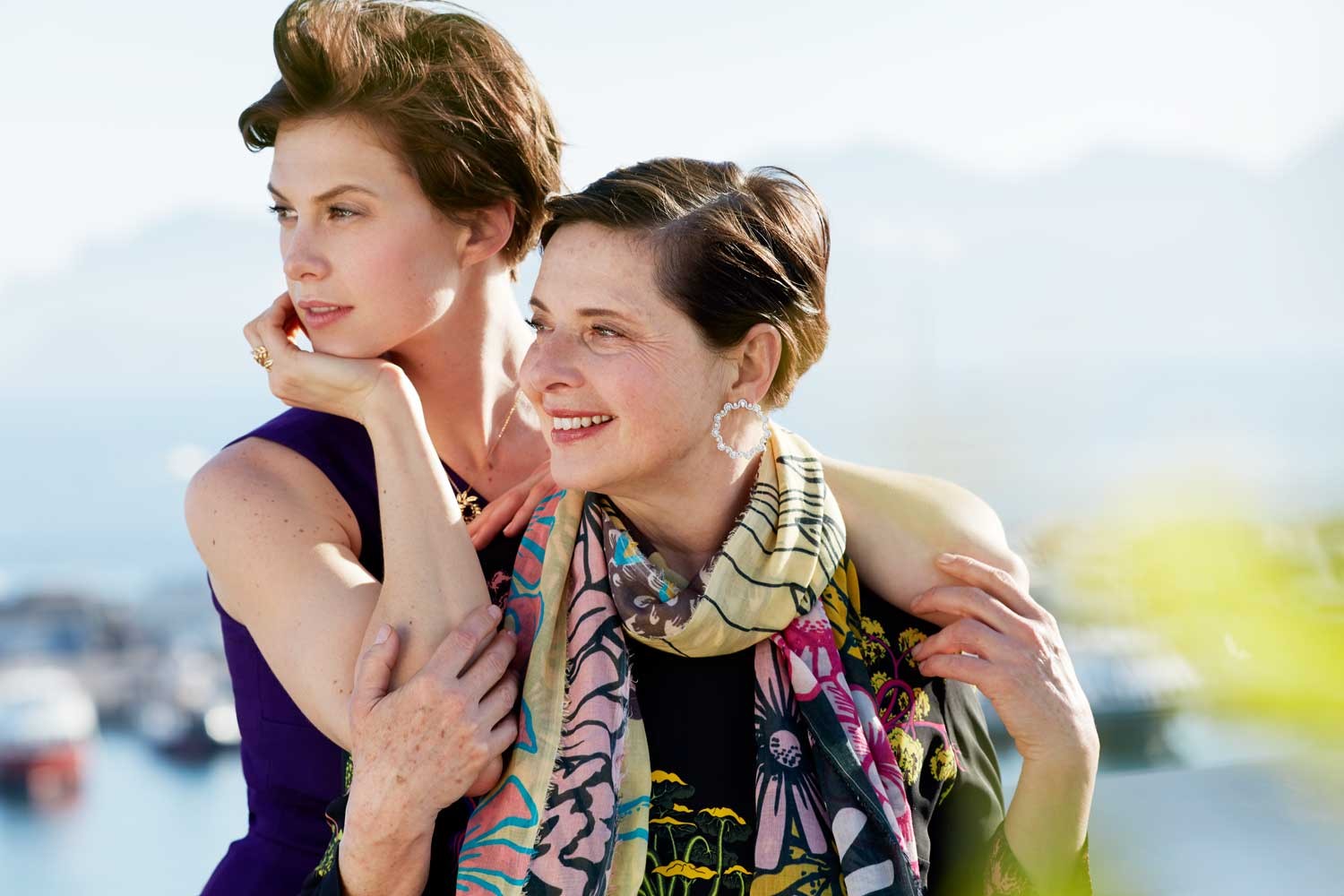 Isabella Rossellini and her daughter, Elettra Wiedemann on the rooftop of the Palais, Cannes, 2015

By the end of each day we’d be so wired on adrenaline and exhaustion from the heat and the exertion that we’d go back to the apartment and just sit there in utter silence for an hour, staring into space, each working our way through our own bottle of rosé, until the alcohol had brought us back down to a level where we were ready to go out and have a nice relaxing…….drink.

We ran into the great Bruce Weber one afternoon and ended up talking to him for about an hour. He looked at us with a sympathetic face and commented rhetorically, “Man, we carry so much stuff, don’t we?”

I looked at Bruce and all I could see on him was a light meter and a Rolleiflex round his neck.

“What else have you got here then, Bruce,” I asked.

He rummaged around in his pockets and replied, “Film, man, film!”

It was a valuable lesson and it wasn’t a lesson about film. It was about the simplification of the process and when I was asked by People Magazine to go to Cannes for them this year I had a chance to apply it. 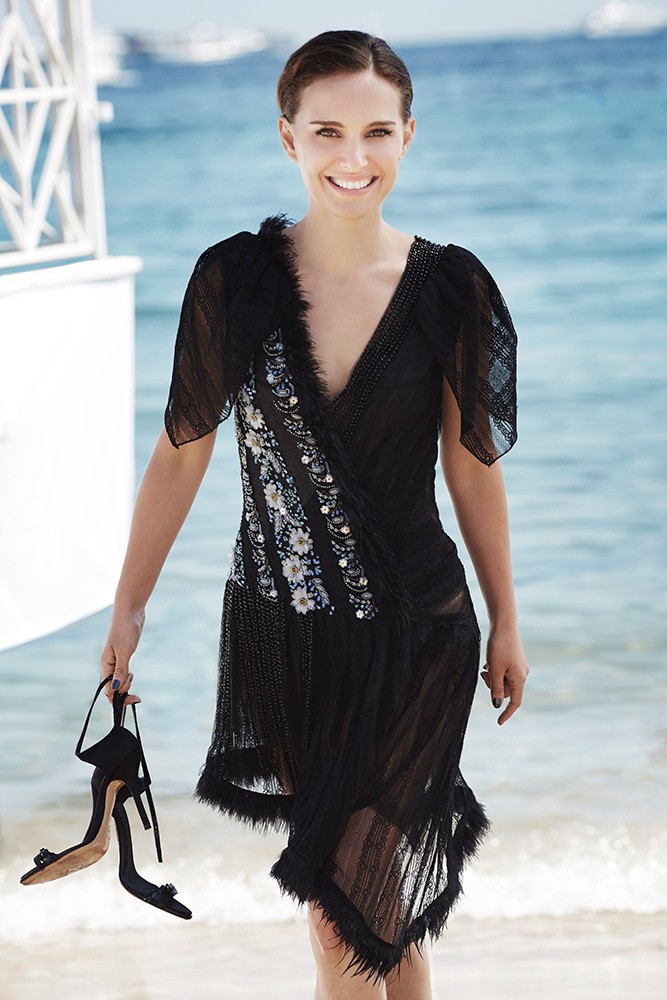 I took as little equipment as necessary: 2 camera bodies, 3 lenses, 1 battery powered light, a 6’ x 4’ frame and a variety of materials to stretch across it: silks, diffusers, reflectors. Just try to use the natural available light of Cannes as much as possible and forget the rest.  And I’m glad that’s all I took because that’s all I needed. Regardless of who you are and who you’re working for, you never get more than 15 or 20 minutes to shoot your pictures at Cannes. Everything you see here was done in the shortest time possible. Publicists tapping their watches because there is always something else their client has got to leave for right now.

Colin Farrell told me that he was there for three days and he had 40 interviews a day lined up on each day, none of them scheduled for longer than 6 minutes.

“By the end of it all you’re sick to fucking death of talking about yourself.” 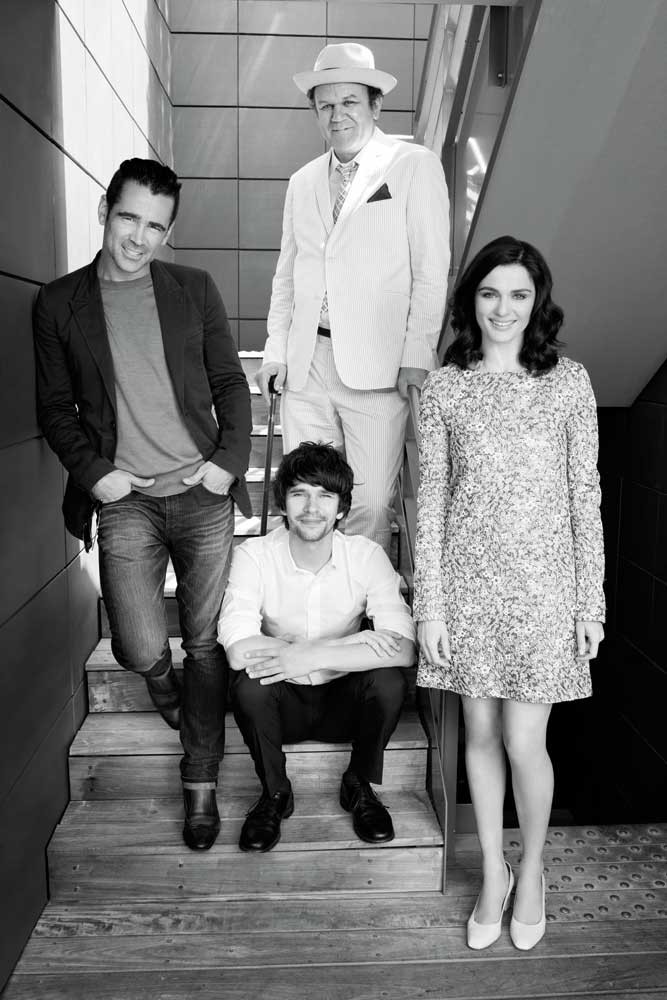 The whole time you’re shooting you’ve got people around you, hovering on your shoulder, nervous people, edgy people, people with clipboards, people with 3 mobile phones. There’s not a lot of laughing. If you let the ominous vibe pervade then it’ll kill you. My way of dealing with this is to be tranquilisingly mellow and laissez fairish about all of it as if it is just about the least important thing in the whole wide world. ‘It will be what it will be and what it will be is great. Hey,  just come and stand over here…..’

I talk for a bit. Just some small talk, an observation on the ridiculousness of the situation. The idea that we have to conjure up some notion of intimacy, photographic intimacy, from this essentially fake arrangement.

The people behind me, I can feel them thinking, ‘Why isn’t he taking pictures? Doesn’t he realise we have to go right now.’

Here’s why. I don’t want the subject’s memory of me to be of a human body with a plastic, metal and glass head. I want them to see that this body has a face and a voice and eyes with a colour too. I want them to understand that they are having an encounter, a conversation, with a real live human being. Then they forget about the job, their job and my job, and together we can make something that’s worth making. 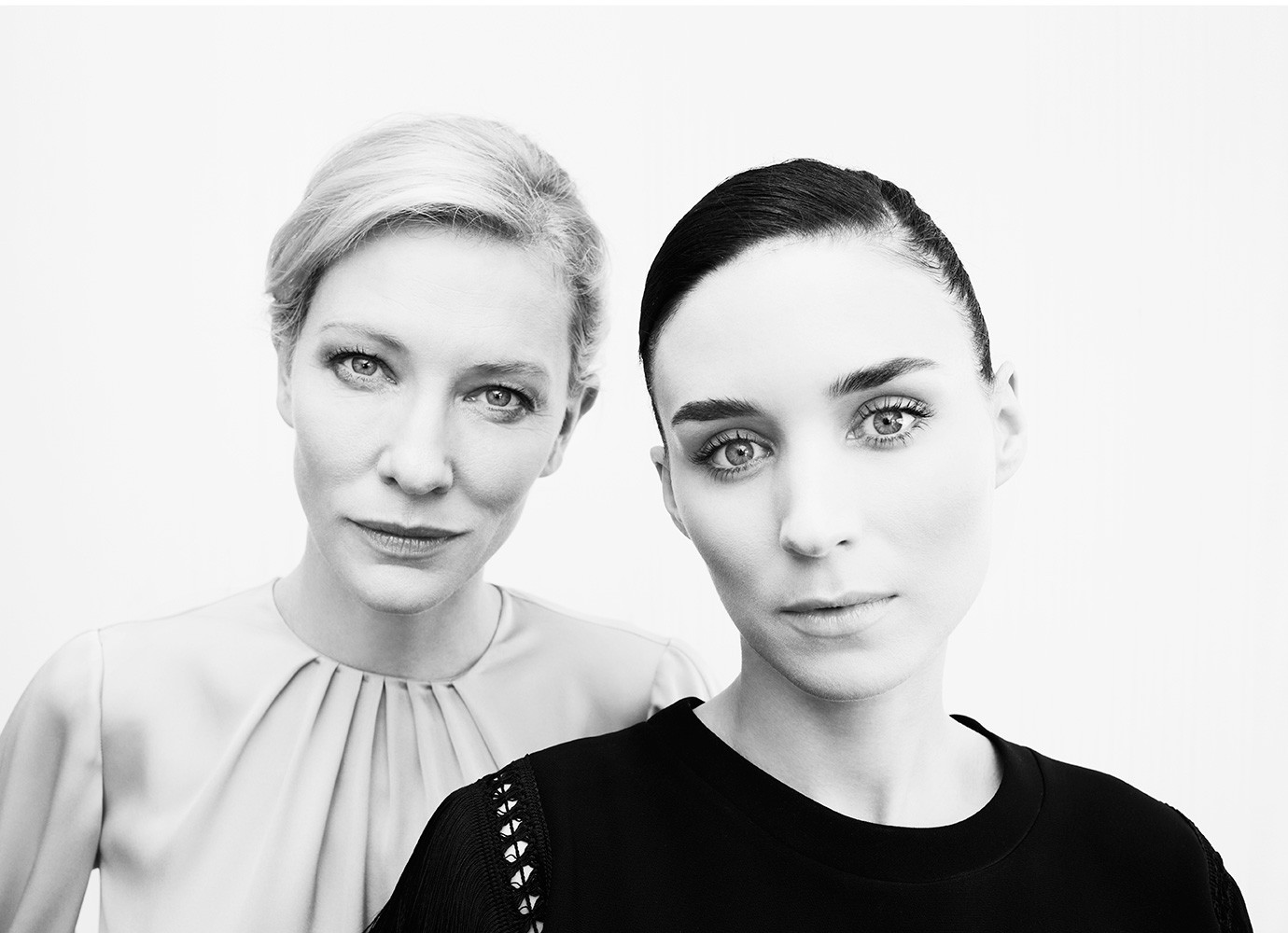 Cate Blanchett & Rooney Mara on the rooftop of the Palais, Cannes, 2015

I only need them to be in that place where they forget why they’re there for a few seconds. Then I lean in and I brush away an imaginary hair or speck of dust from their collar to show that I am human too and that I am propelled by empathy. Then I lift my camera up and I start working. Still talking but now working too.  I am only too aware of how little time I have but within that period I want to be the one to control the pace, to slow it down to a point where small gestures have meaning and slight moves of the head can alter everything.

That’s the thing about this job. Sometimes you only do it for five minutes but if you do it in a way that feels right for you, you can make it feel like it lasted all day. And in the best possible way. 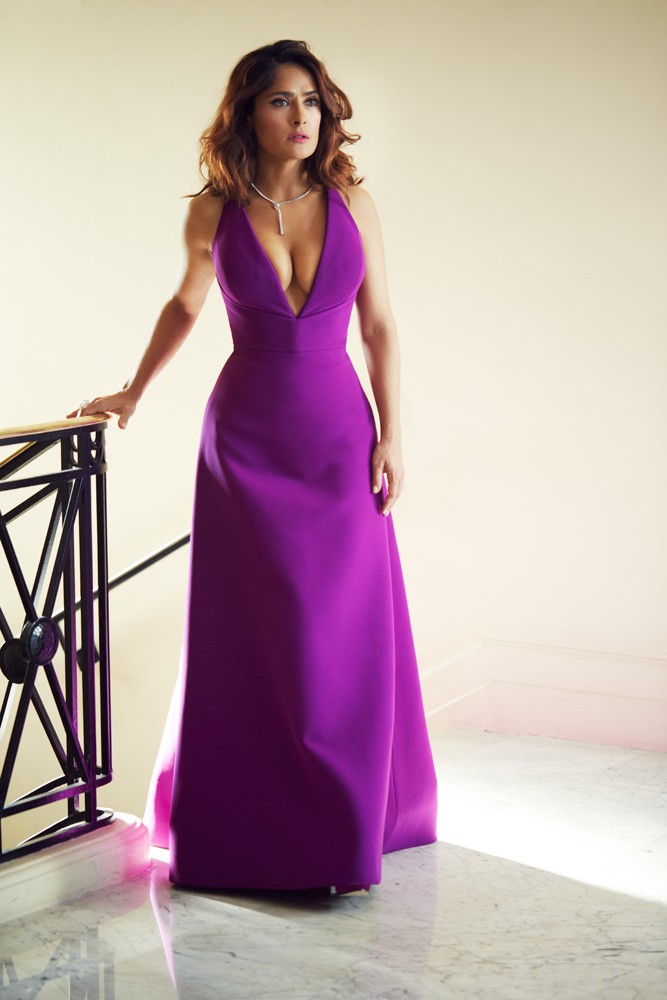