All of these encounters are built from the same basic structure in that each was scheduled to last for a short period of time – one to two hours – and each took place in an alien environment, on the subject’s turf.

All havebeen doing what they do for a long time and it could be said are known for a particular integrity, as well as sometimes a certain spikiness.

What do I mean by the confrontation/collaboration curve?

In an earlier blog post on my portraits of Ray Winstone I alluded to it and it has been bobbling around in the back of my head like a ball on a roulette wheel ever since. All great portraiture has to involve a combination of collaboration and confrontation, represented by the imaginary line that connects photographer to subject and upon which it’s necessary for the two to meet if anything at all is going to happen. If the two meet somewhere in the middle third I’d say that was a collaboration. Anywhere on the third at each end then it’s more of a confrontation.

Each of these three, Jeremy Paxman, Paul Weller and Damon Albarn, started out in my head as similar in terms of what I was prepared to expect. Well, actually, Weller not so much. Of the three, I have photographed him before (with Noel Gallagher) in the upstairs room of a pub and the afternoon became the evening, which became the night. Definitely the night. On top, I come from the same part of the world as him and the fact that we can talk about that place quite intimately meant that, even though we last met seven years ago, he remembered not only me but the night with Noel too. So of the three he was the one of which I was least nervous, despite his sometimes brusque reputation.

Another thing about Paul is that he innately understands and likes cool imagery. If you get him, or he gets you, then he’s easy to photograph. Don’t ask him to put on a circus outfit and run through a flaming Mod target of fire but address him on terms that reflect his sense of the world and working with him can be a flowful experience. There’s a quietly patient zenness to the way he sits. He’s very still, physically and in the way he projects too. I remember the room being so quiet but there was no fidgeting, no impatience. He sat in his chair and he was evidently comfortable in his body and skin. If I saw him do something that I liked, and said so, he would hold it for long enough. His gaze into the camera was resolute. He speaks quietly. Short sentences. He’s completely the opposite of bombastic. Precise, measured, quiet and confident, a silent collaboration.

Confidence. What is that? Based on our public perception of him in his role as host of ‘Newsnight’ we’d probably all agree that it’s something that Jeremy Paxman has in surplus amounts. Based on an hour and a half with him in the living room of his agent’s house, ostensibly to produce some pictures of him for a poster to publicise his Edinburgh show this summer, I’d say I’m not so sure. This is all gut instinct, cod psycholgy, but after twenty years, I don’t know, you learn how to read people quickly. Not in novel form but definitely in sketch. I may be on their turf physically but they’re in my landscape once the door’s shut and the lights come on.

There was about him a kind of dichotomy at work and my instinct also says that it’s this which makes him so compelling to watch as an interviewer and journalist. Not far below the surface there is a great uncertainty, a doubtfulness that surges and falls in relation to the output and the noise around and inside him. Bombastic at first glance, he comes into the room like a rapidly decelerating sports car, tentative not far behind. At every stage he would more or less do what I asked him, whilst simultaneously challenging the necessity of it. At one point we had a two line exchange that punctured the tension and made the whole thing quite a laugh.

“What an extraordinarily strange job you have.”

“Well yours can hardly be classified as normal, can it?”

His Newsnight persona is not an act. It’s the necessary manifestation of an internal need to seek truth and honesty not just without but also within. I liked him very much and came away thinking that his role in public life adds to its richness and, again, its integrity. In summary, a collaborative confrontation. 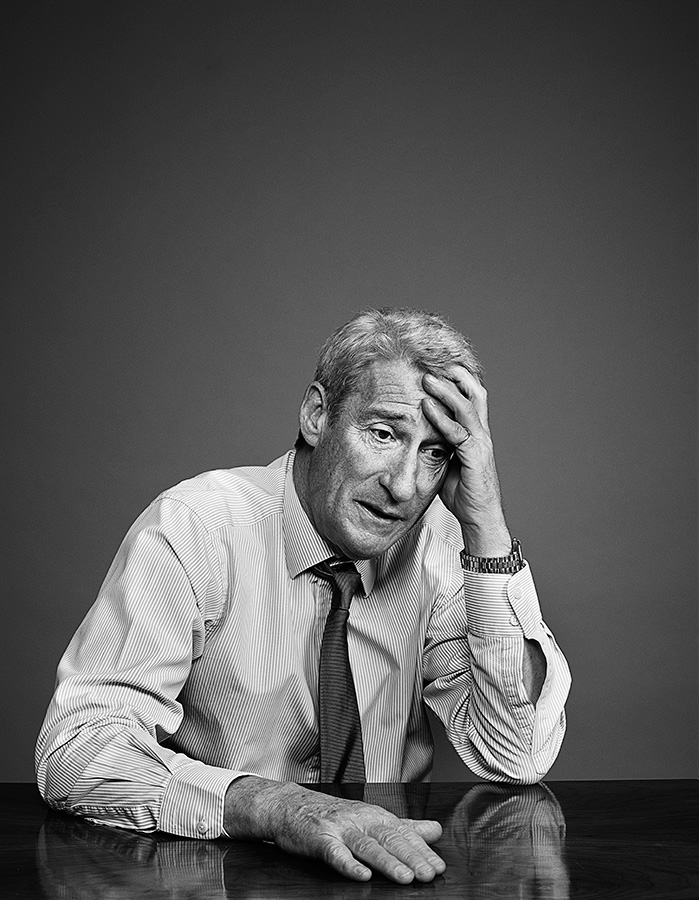 Weller has been in my cultural life since I was about eleven or twelve years old and Paxman for my entire adult life, probably since Spitting Image cast him in latex. Damon Albarn has been here for the shortest amount of time, yet of the three he’s the one that I probably feel the closest affinity with in terms of comparative experiences. We are the same age, born 1968, the same height, same colour eyes and hair, same kinds of suburban adolescences where London was some aching distant nirvana, twenty miles and twenty light years away. Both him and Neil Tennant have a beautiful ability to clarify and crystallise the longing to escape suburbia for a less mundane existence but paradoxically, had they always had what they felt they deserved, or were in need of to complete themselves, they would never have become the artists they did.

My career came into bloom at the same time that his did, 1994, and over the years I have photographed all of his British contemporaries and a good few foreign ones too, yet, frustratingly, never him or his band, Blur. Perhaps an invite to spend an hour with him in his studio was something to be wary of. My gut said yes and so did my mouth.

In the Ray Winstone post I mentioned how it feels when a meeting on the line has fallen short:

“There are some where you can feel that you are only inches apart, yet you’re just not going to make it. Those are the worst. They torture me for days afterwards, blaming myself for an imagined oafishness or missed opportunity.”

When I wrote that it was the time with Damon that inspired it. All the way, a confrontation punctuated by very short dashes of tolerance rather than collaboration.

We had arrived an hour earlier than him and set up in one of the rooms at the studio, a large soundproofed thing with pianos and keyboards along every wall. An incredible sandpit for a grown up.

Damon arrived and thought that the erection of a 9 foot wide backdrop was silly. He thought it was ‘a bit formal’. What can I say to that? I like to photograph people on plain backgrounds. I don’t want to work against a cluttered wall with Indonesian puppets in the background. So that was where we started. I tried to break the ice:

“Oh God, this isn’t going to turn into a stand off between two passive aggressive people, is it?”

That got us back to one degree above zero with a wry(ish) smile. So seizing the initiative I ploughed on, a triumph of hope over experience, trying to explain my theory of confrontation and collaboration, eliciting this short, sharp response:

“I’ve had my picture taken enough times and I know what a good photograph is.”

The thing about a statement like that is that in one sweep it lumps you in with every other photographer he’s ever met. Nothing special, nothing different. This time is unimportant, it’s merely something that stands between me and my desire to bring it to a close. To the ego it’s a declaration of war.

“Well I’ve listened to a lot of records and I know what a good song is.”

From there Damon’s passivity dominated the room. It was a creatively negative energy that coloured everything, or rather desaturated it and even getting him to engage with the camera was a small victory.

He was extremely difficult to get a read on and it’s been a long time since I’ve come away from a subject feeling locked out. I have referred to the act of portraiture as similar to that of a burglar casing a building, looking for an open window, a way in. That, to me, is often how it is. I walk all around the place trying doors, tugging windows, asking questions, talking, always talking, as if the act of talking is the key to one of those windows or doors. And 99% of the time it is but with Damon it wasn’t. I shrunk back into myself, defeated and outsmarted by a psychological terrain peppered with invisible patches of quicksand. Just as I felt we had established a surer footing, a vortex of ground would draw me down.

At one point, in response to something I said, he offered this beauty:

“And you were doing so well.”

I couldn’t even look at the pictures for several days afterwards. When I finally did, pressure of approaching deadline rather than any desire at all, I realised that although the encounter was demoralising on a human to human level it yielded something worth having on a photographic one.

It’s funny, for twenty years I have been told by so many people how much they think I look like him (same age, same height, same eye colour, same hair, same build once but not now), to the extent that in a Los Angeles bar in the mid nineties, when I assured a barman who thought I was him that I was not him, he replied, “You look more like him than he does.” When it goes on for so long it becomes a bit of a joke, part of your schtick, part of who you are and all that. Then you meet the guy, you spend an intense couple of hours together and while you’re on his turf you overhear him talking to someone from his management and he refers to you as ‘the photographer’ and you realise that he doesn’t even know your name.

Sometimes I wonder if this happened to Richard Avedon or Irving Penn or Arnold Newman or any of the others from whose shadows we try so hard to emerge. 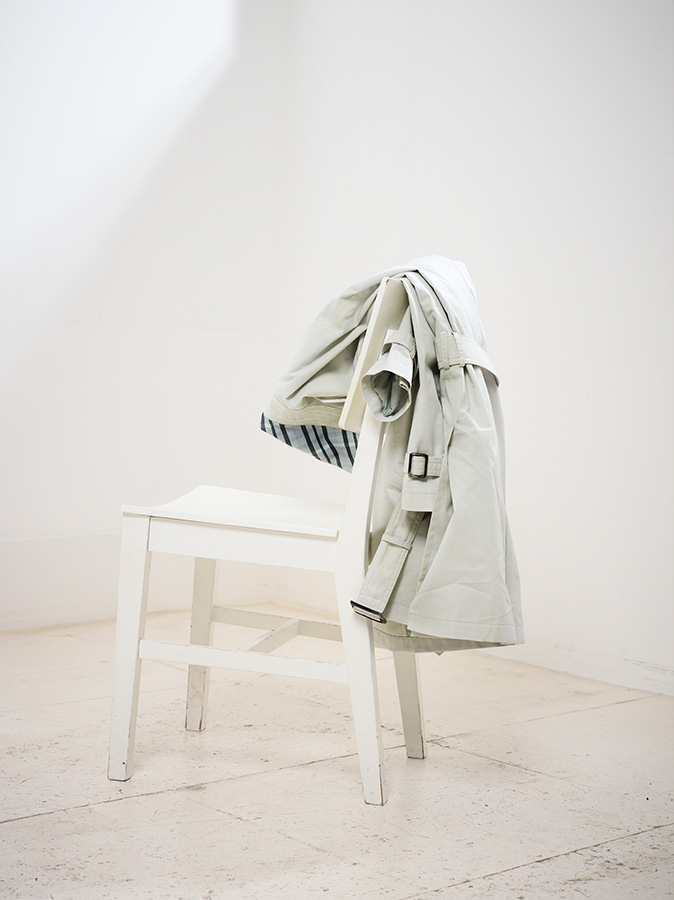